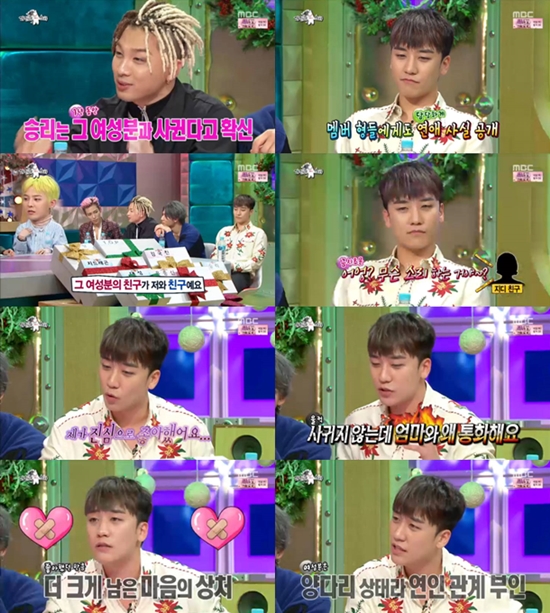 On the December 28 episode of MBC′s Radio Star, the 5 members of BIGBANG appeared for their second story.

During their visit, Taeyang began the story of Seungri′s relationship by sharing, “There was a time that Seungri revealed his relationship to us because he was sure he was dating this girl for 1 year.”

G-Dragon explained, “At the time, the girl was a friend of a friend and when I asked, the friend said, ′What are you talking about?′”

Seungri then shared, “I really liked her. We wrote each other handwritten letters and I even talked to her mother on the phone. Her mother said ′Seungri-chan.′” The MCs heard this and asked if the girl was Japanese. Seungri who let that slip said, “The mother called me ′Seungri-ssi.′ Why did she let me talk to her mother when we′re not even dating?”

He continued, “I thought we were dating, but I was more hurt because I was betrayed. At the time, the girl was dating two people, so she denied the relationship. After that incident, it′s been a long time since I dated.”