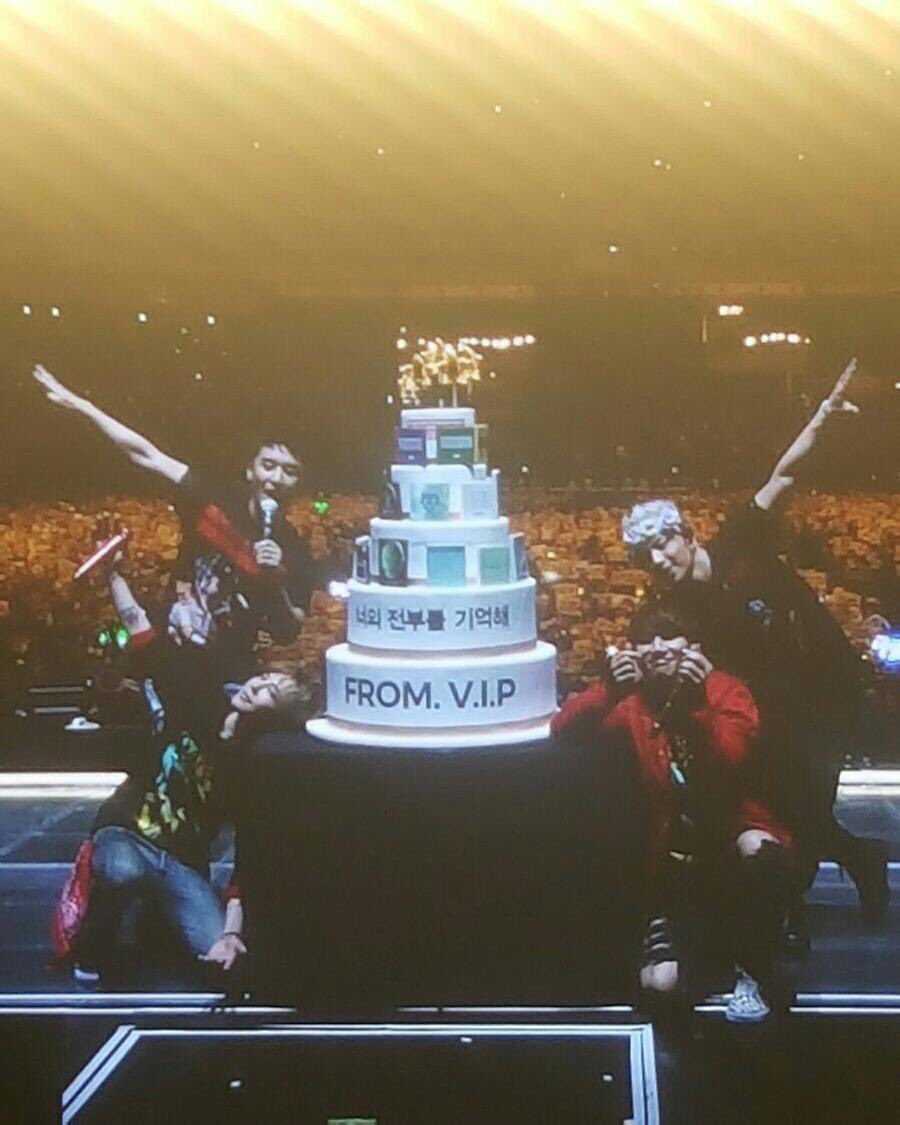 #lastdanceinseoul
Out of nowhere Seungri lay on the floor and did push up... the GD sat on him 😂😂 pic.twitter.com/DNNRSUnf7W

YOU ARE MY DARLIN’ 😭😭💕 pic.twitter.com/DGm47svBis

#LASTDANCEInSEOUL
Omg sexy Daesung... he strip his chest and gave a heart coming from his chest 🔞🔞🔞 pic.twitter.com/DcqcWBJQBC

Daesung... where are your eyes?? 😂😂
His eyes are so small omg...#LASTDANCEInSEOUL pic.twitter.com/bt76ddgxbD

DS & RI’s I am A Chingu Boy dance 🤣🤣🤣 pic.twitter.com/RYzogFrh7V

GD's last comments today he will not worry about VIPs . He believes VIPs will be there as like before. Still he cant believe todays is real last One fan shouts "we will wait "then he indeeds YES you should. Lastly he asks more love ❤️ from VIPs its real ends😳😥🙏

YB: Lastly I will like to say something, I don't think I'll have the chance to say it after I enlist. Actually, we really like SR and that's why we tease him on stage but this has caused problems to SR's fans. That is not our intention, so I'll like to apologise
-c- pic.twitter.com/Jvd95lTRu9

SR: You don't have to apologise since that's not what you meant
YB: I feel like I need to explain it's because we really like him
DS: You're looking down on the fans, because they are not petty!
VIPs: Yes!

Taeyang wants to apologize to Seungri's fans for teasing him. SR was like, "There's no need, our relationship isn't like that. It's actually GD who needs to apologize (joking)." GD: Me? TY: But still.. SR: You think too much DS: Everyone gets that/knows your heart. Right?

VIPs singing Last Dance while waiting for BIGBANG... so beautiful.. we will be here waiting until whenever 👑🤧😭❤️
cr: k._.h2#LASTDANCEINSEOUL #everLASTing_BIGBANG pic.twitter.com/AoTAdrceXl 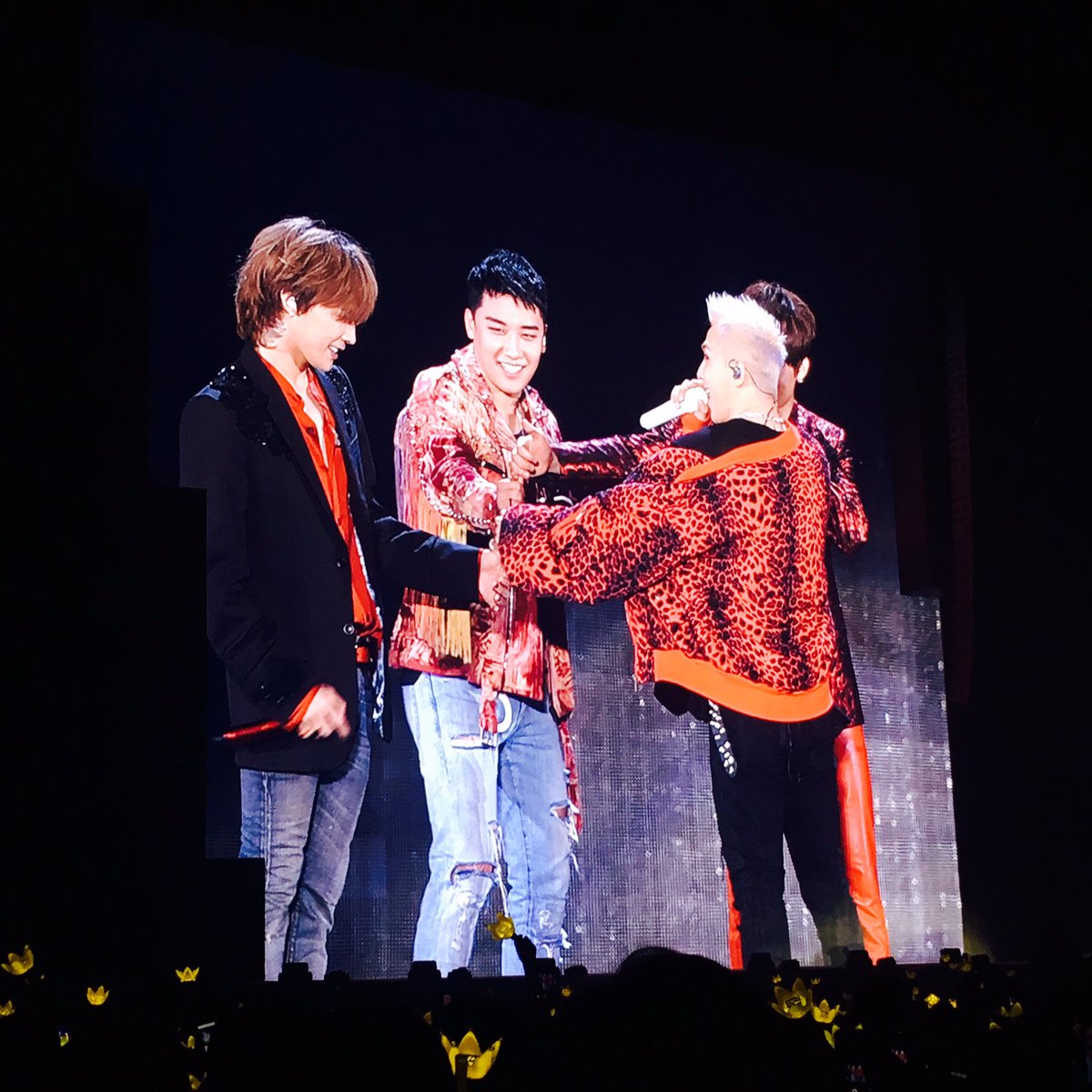 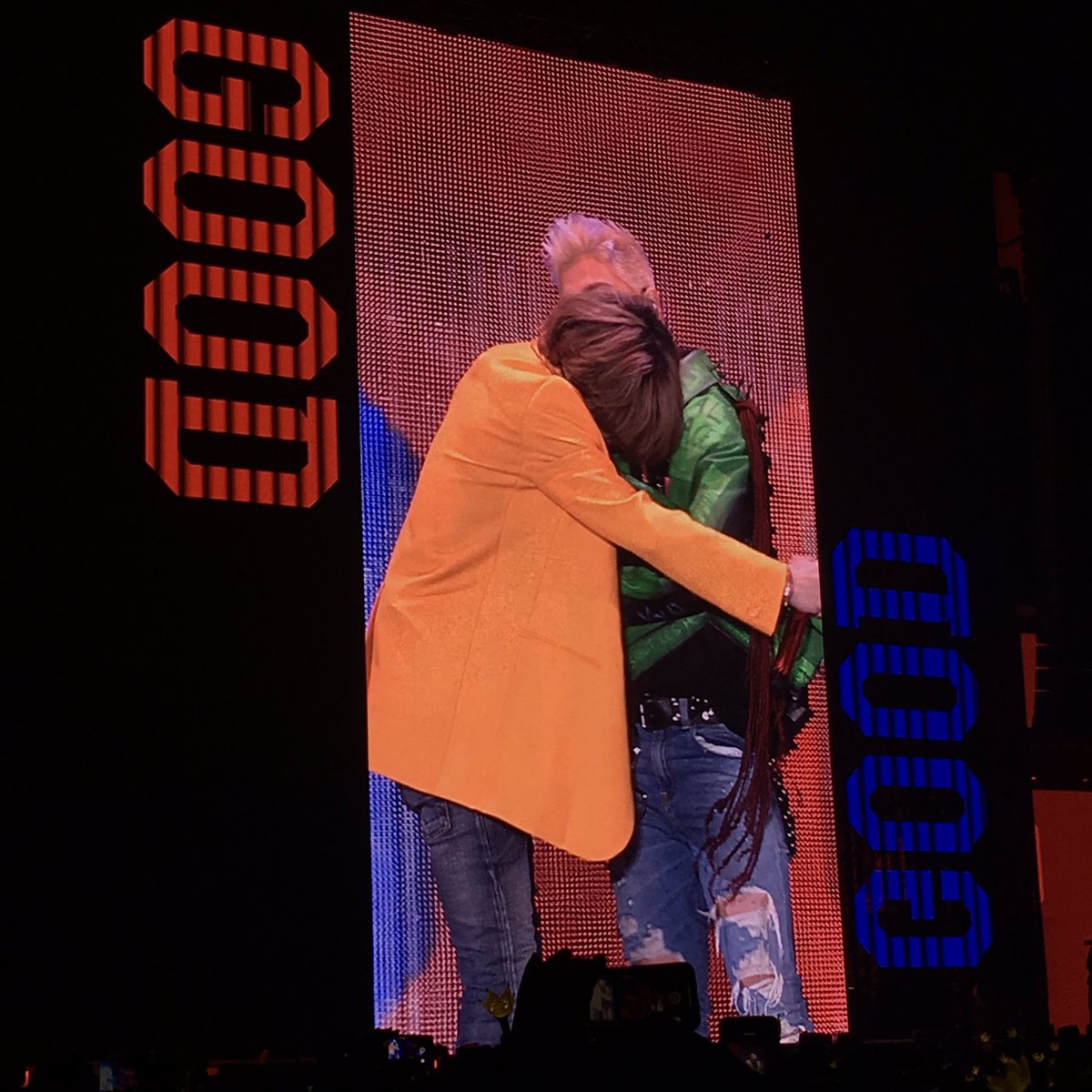 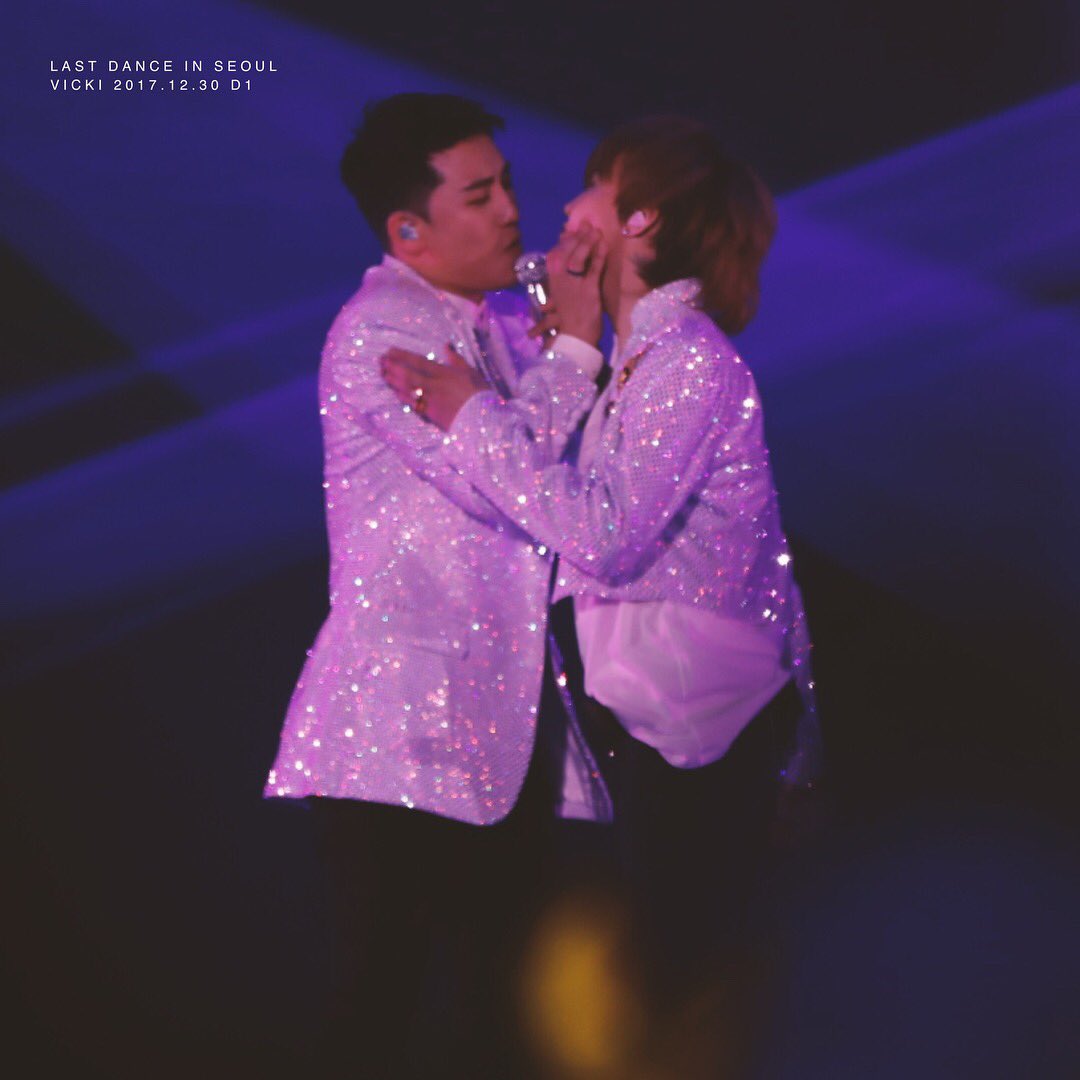 #LastDanceinSeoul the Legendary king is sparkling! ✨

OMG THE BEAUTIFUL YELLOW OCEAN AND OUR KINGS ..SO AMAZING????????????
CR: jinusean3000#LASTDANCEINSEOUL pic.twitter.com/Vch61R4PyL

OT4 INTRODUCING THEMSELVES AND OMG THEY ARE WEARING NEW OUTFITS ????
cr: mariafromatl#LASTDANCEINSEOUL pic.twitter.com/Tux4ixYrUu

Fxxk it on substage and gd kissed ri's hand what. Was that ri 's hand it's too shiny with their clothes lol

We like 2 Party and OT4 among the Yellow Ocean ..they look so gorgeous in new outfits ????????????
via: tomochiii222___gyb#LASTDANCEINSEOUL pic.twitter.com/bY5WCyeNqa 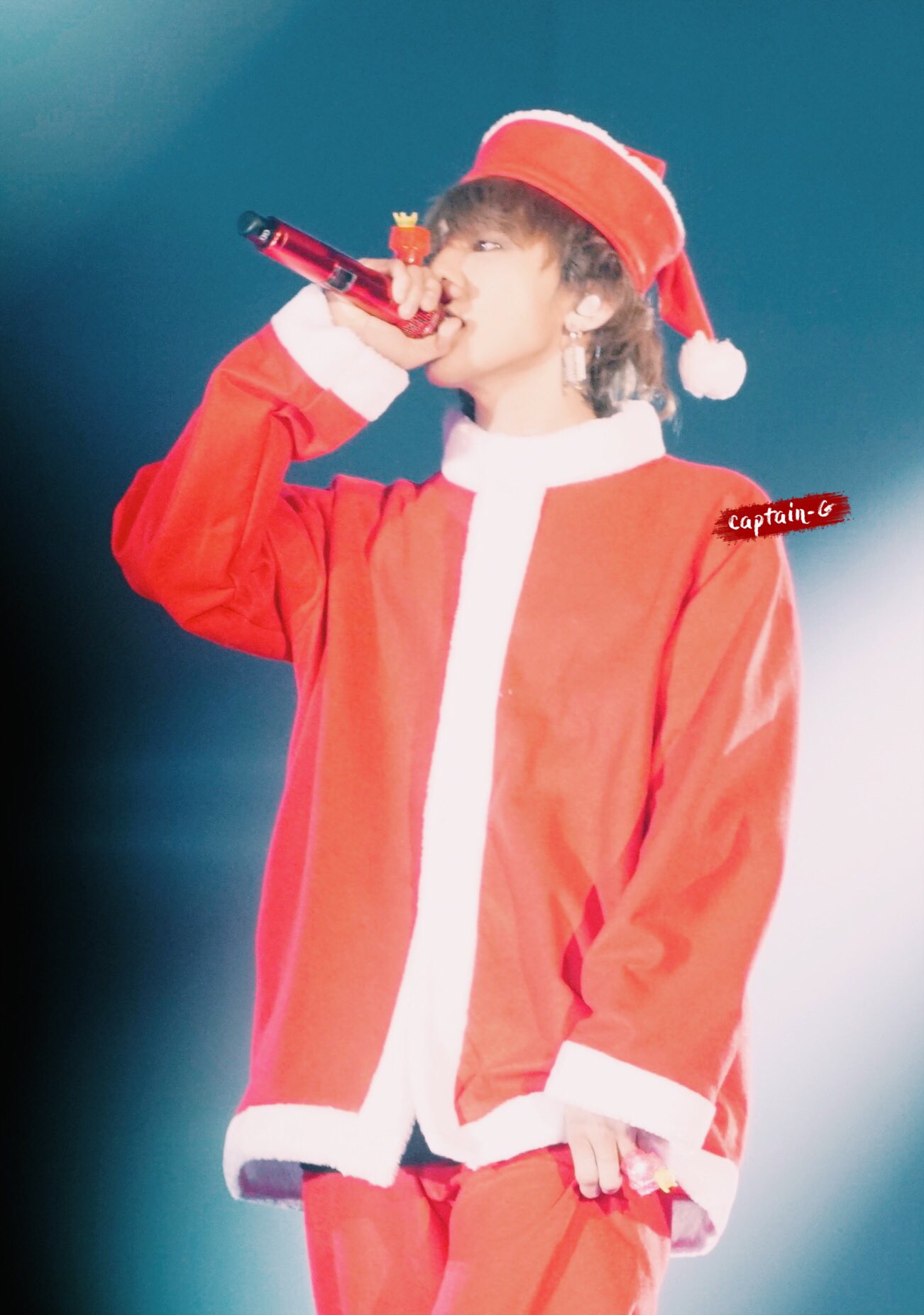 Bigbang did the manji 卍 pose on stage, #OT4 pic.twitter.com/heb1k3DJnN

• BIGBANG says they’re so happy and thankful that many VIPs came even though it’s Christmas eve later.

• Taeyang mentioned TOP and told us to wait for the 5 of them.

• G-Dragon said he really missed his members when they were so busy with their solo activities.
Taeyang: As Jiyong said it was kinda lonely during solo concert.
G-Dragon: Yeah I was lonely
Taeyang: Daesung, you were lonely too right?
Daesung: Uhm I was lonely (but he was kinda not listening)
VIP: laughs (could not believe)
Daesung: Why? I was lonely too.
Seungri: GD, TY, DS had their solo concerts right? So I went to the company and ask, can I voluntarily go as their guests? (He said it in a funny way.)

• GD: Hello? Hello? Hello? Hello?? There’s nobody here? There is?
Again GD commented about the song Untitled, 2014 and asked “You know, right?”
VIPs: YESSSS!!!!
GD: And today is the transmission and recording of the DVD, right?
GD finalized his performance saying “Yatta!!!” (I got it)

• DS: Hello? Hello? Moshi moshi? There’s nobody here? I saw GD doing this and looked so cool and professional, so so I thought I might try. What did you think?
Daesung explained the meaning of A • ZE • CHO (Anata | Zenbu | Chodai) Give Me Your Everything, and said there is a choreography for everyone. While teaching the choreography he said to move as if we had a tail, but he ended by saying “Move like a fish.”

• They are imitating each other and again Daesung said he wanted to touch Seungri’s butt so Seungri scream “DON’T TOUCH!

• DS: How was the name of those two? GD? (Referring to GDYB)
SR: Dragon Ball, the blonde of Dragon Ball.•

• Daesung started joking with Seungri as usual and Seungri said “Don’t say things like this today is the recording of the DVD.

• Daesung said he didn’t want the show to end because he’s feeling sad about it and also expressed his gratefulness for it. He also said that it was a really busy year and thanks to the fans that he was able to do so many events in Japan and thanked again. He talked about his January concerts in Hawaii and also said this will be his last solo schedule.

• Taeyang said it was a very busy year and because of the feeling of wanting to fans they were able to work hard. He also said that it is very sad that we will not be able to m but they, including TOP, will return.

• GD said that not being able to members and/or fans was making him sad, since they were all very busy. Being able to be there with them was a relief. Again he said their love will not change and ended by saying “thank you so much, really.”

• When GD was commenting about spring and hot days (a metaphor about the return of the group), Taeyang started singing “Blue”, which have a part that speaks about spring.

• Again Taeyang asked if Seungri will wait for them and Seungri said “Again this? Are you really going to do this until the end?”

• “In Japan, we started with a venue for about 500 people but now we can even do a dome tour. Since 2012, have been 87 times doing dome concerts thanks to the fans.”

• Seungri even talked about staffs and ended by saying he loved everyone. Taeyang joked that he rarely says such things and asked why. Seungri replied that it’s shameful. He was saying it’s a romantic time since it was Christmas. Taeyang interrupted him saying he’s cute today. *In Japan, Christmas is a commemorative date considered suitable for couples.

• YB: Our Santa Claus, D-LITE!
YB: The cutest Seungri!
YB: The leader of the group until now and forever GD!
YB: The person we miss the most, TOP!
DS: Our SOL! YB: AND OUR VIIIIIIIIIIPS!

• Seungri started say something with long breaks so Taeyang and Daesung started said “Don’t cry!!!”, and Seungri answered “I’m not going to cry”
SR: Although TOP isn’t here, really… BIGBANG is 5″
He finished by saying how grateful they were for our love and promised that the 5 will return to that same stage.

• The members in Santa suits:

YGEX gave fans bracelets with lights that sync with the music and also formed “BIGBANG” and other words during the concert: 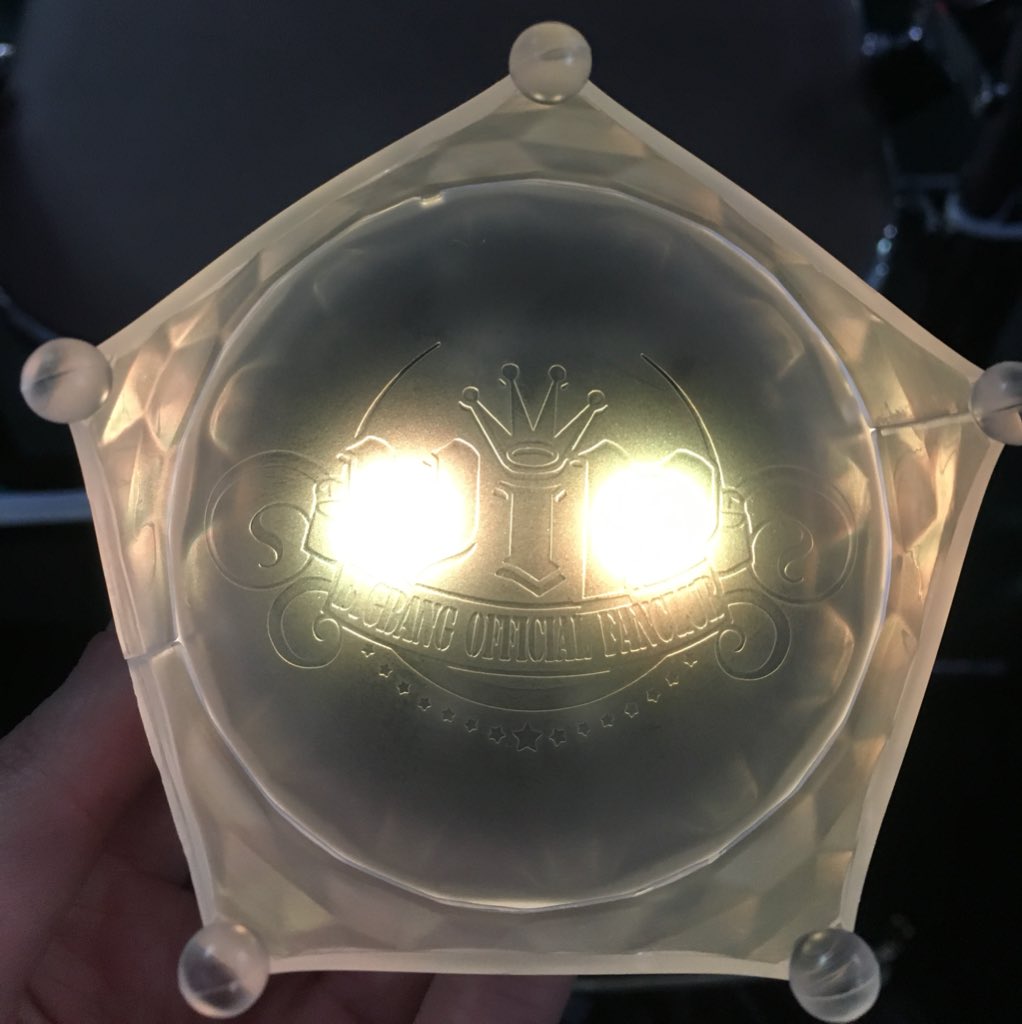 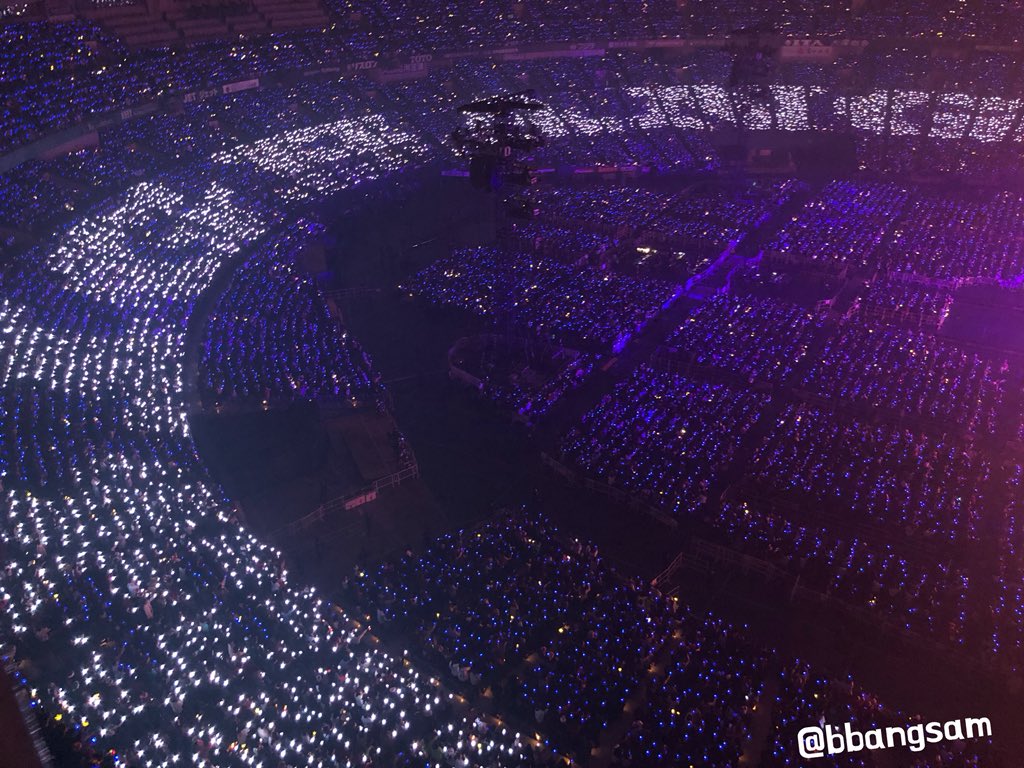 AT THE CONCERT VENUE: 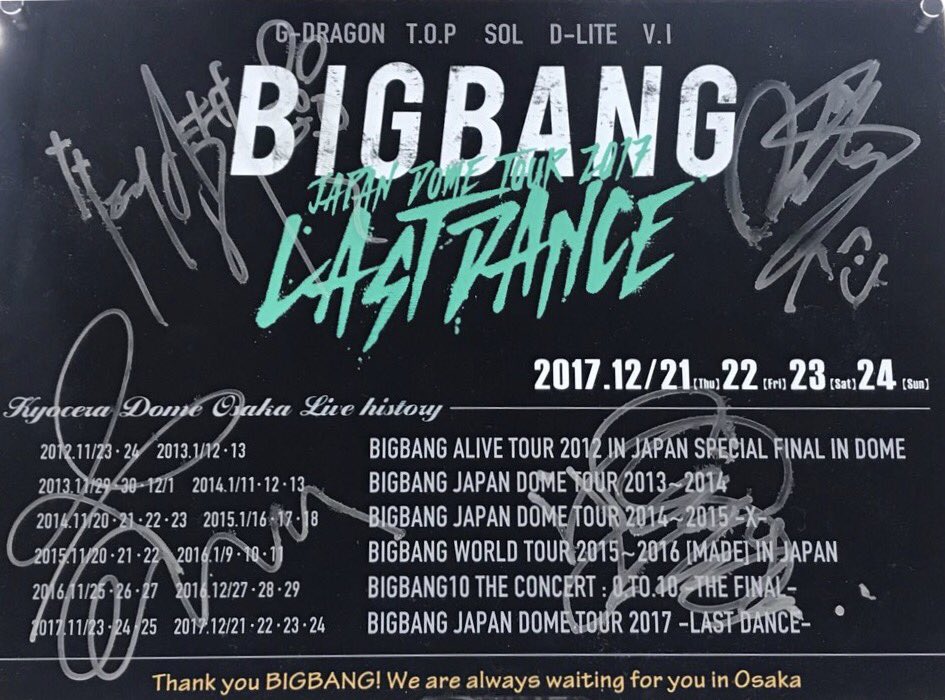 VIEW FROM THE STAGE:

Bigbang did the manji 卍 pose together ???? pic.twitter.com/l5sQMfKOhl

The last Dance for JVips. Thank you so much kings #LASTDANCE#LASTDANCEInOsaka#BIGBANGLASTDANCE#BIGBANGチケット#BIGBANGJAPANDOMETOUR2017#VIPsuntilwheneverpic.twitter.com/Gzyvo2nSds 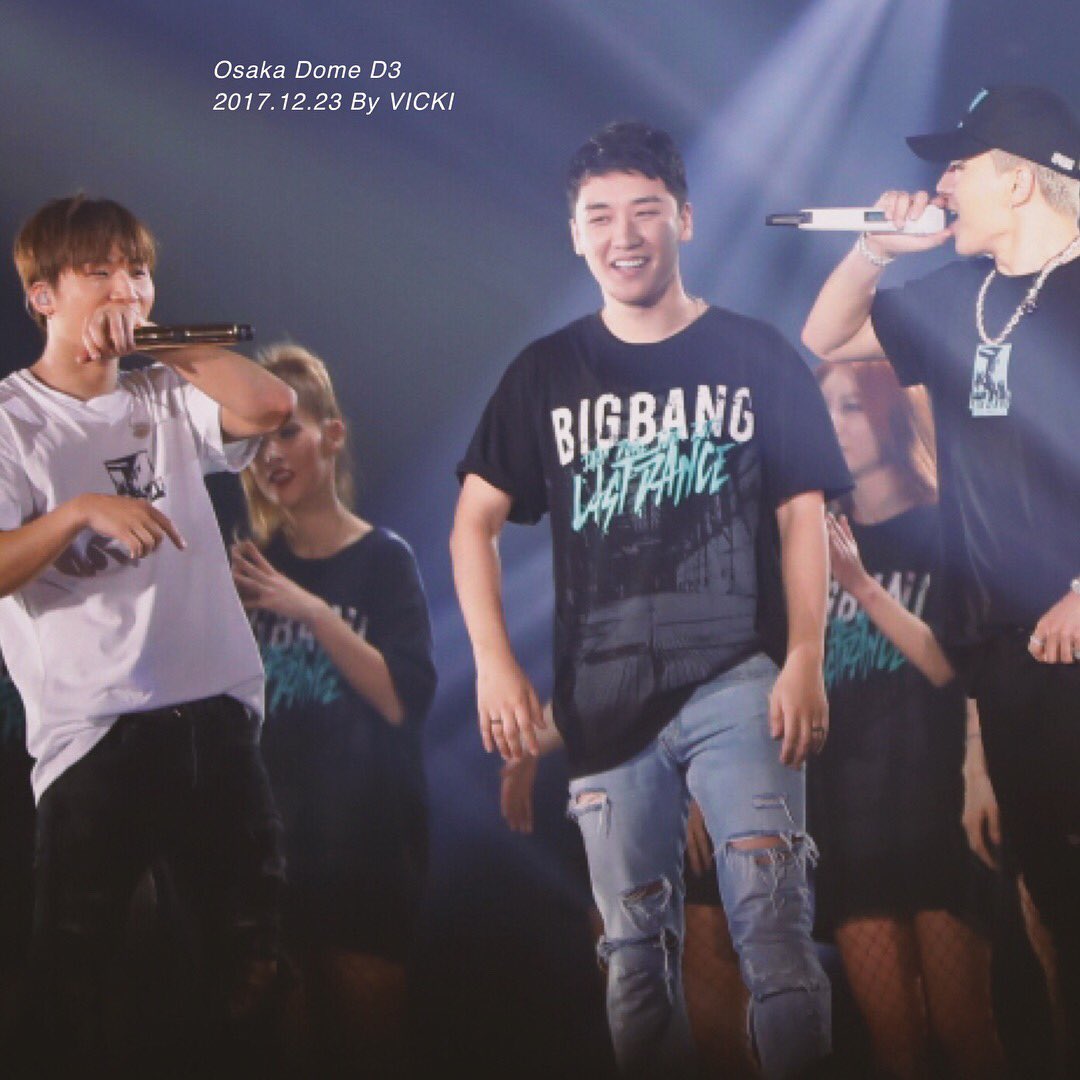 This is so magical BIGBANG singing Feeling and the beautiful yellow ocean
cr: coral5201#LASTDANCEInOsaka pic.twitter.com/dEcwfSQpyP

YB: Next year we 3 will go but Seungri will stay behind alone. Originally we were gonna go all tgt but Seungri backed out last minute
DS: 😱 You can't say that, cuz it's the truth (he was laughing, while GD was crouching down laughing too)
YB: They're gonna know soon anyways

SR: Cause I am still young
DS: I also have time left but I'm going early
YB: The reason I'm saying this is because Seungri will do sth while he's alone so I ask for your support
SR: I really have nothing planned, just like this year I didn't do anything but a ramen tour

YB: But I'm sure you'll do sth next year, right?
SR: What I really wanna know is, how can you know about plans that I still have no idea about?#bigbang #lastdancetour #osaka #round2 #day3

Please note that Seungri also mentioned that he tried to enlist early but there are many people on the enlistment list and he cannot influence it at this point. (cr MShinju)
​

Santa YB kissing gifts and then giving it to VIPs.. JVIPs are so lucky💕💕
cr: coral5201#LASTDANCEInOsaka pic.twitter.com/b90w8KGqR2

​
Click on any of the photos below to see an enlarged version. 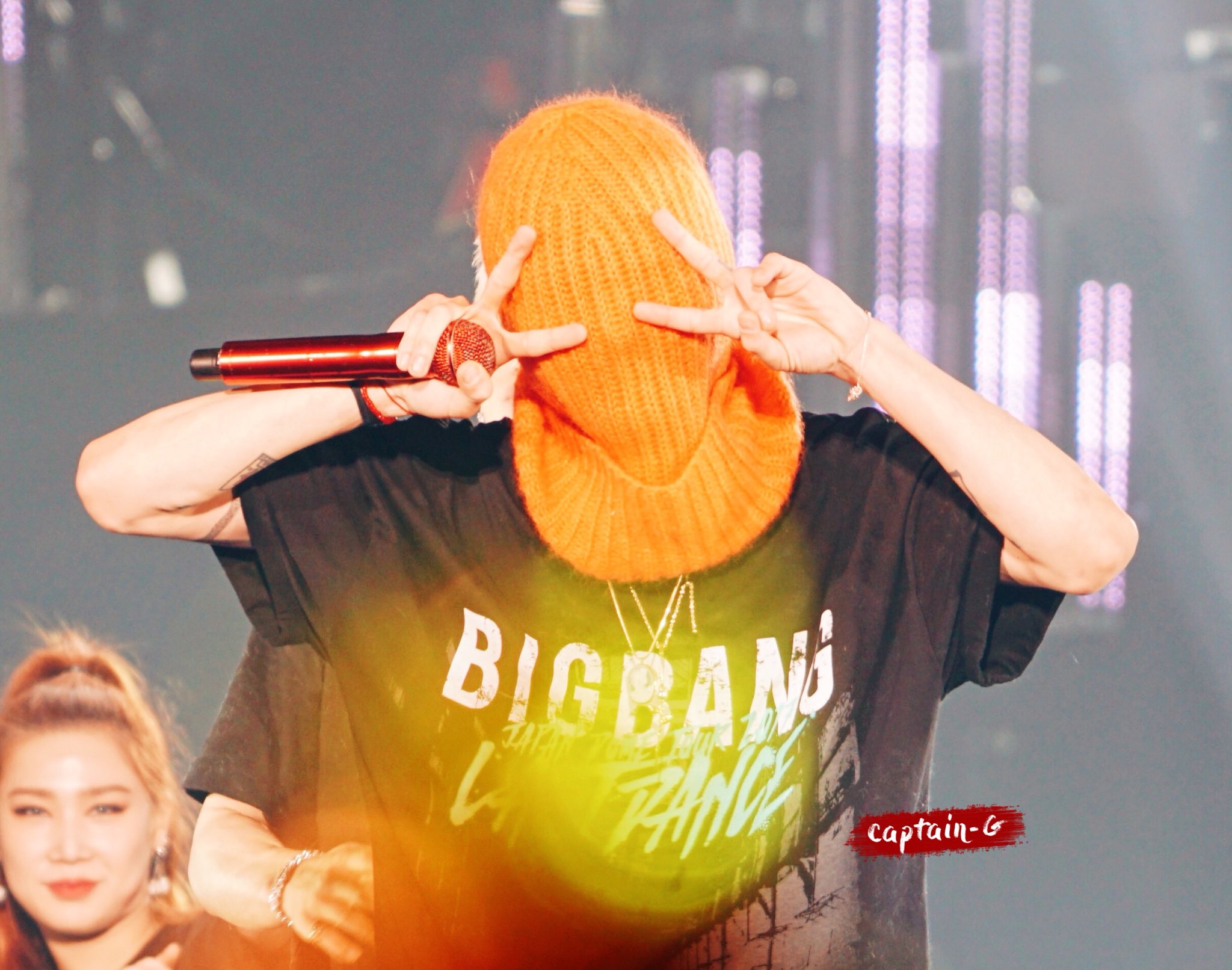 ... gestured as if sth was pulling his body out of bed in tge morning and Daesung was impressed and congratulated him on his acting skills 😂 That's when Seungri jokingly said that he might try acting next year, maybe High & Low again, though they haven't called him ever since...

Seungri told the story again of how he went to see GD drunk in Jeju and he kept calling him sempai (sunbae in Japanese)
GD: (to DS) We've been together for over 10 years but he still calls me sempai. I thought we're family by now.
DS: So close, that wall has disappeared.

SR: I call him sempai because he's my sempai. What should I call him instead?
YB: We've spent the last 10 years together but you decide this only now?
SR: So what do you want me to call him?
YB: Just call him naturally.
DS: Whatever you want to call him is fine.

YB's introduction of the members:

DS: Yabai Kang, D-LITE!
SR: The cutest maknae in the world!
GD: Forever leader, GD!
TOP: The one we miss the most, TOP!

Then Daesung introduced YB as "the hottest man in the world, SOL!"

The without you moment Seungri was holding his jacket Jiyong took it and made him wear it..so cute my babies 💕💕
cr: logo via: bigbanggriapinkeunji#LASTDANCEInOsaka pic.twitter.com/EduDkliKZf