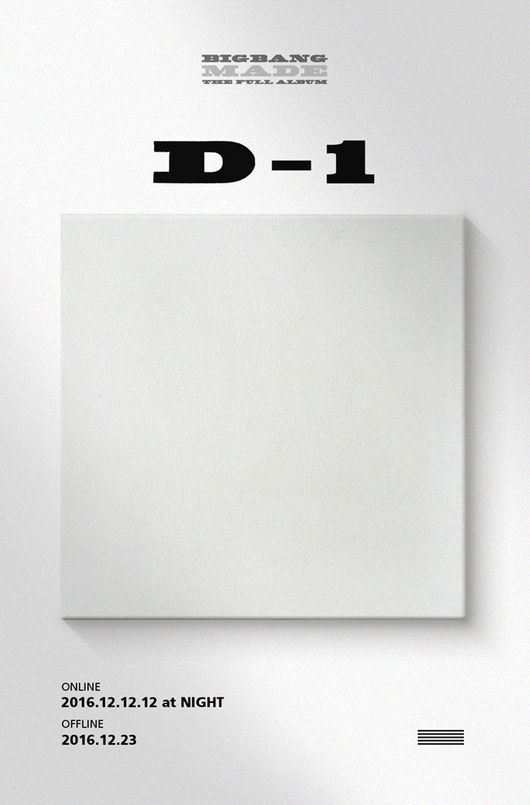 [OSEN=선미경 기자] The grand finale of BIGBANG’s 10th anniversary project, the release of “MADE THE FULL ALBUM”, is just around the corner.

At 10 AM on December 11, YG Entertainment released a d-1 teaser poster on its official blog.

YG Entertainment has been revealing countdown posters for the release of BIGBANG’s “MADE THE FULL ALBUM” starting from six days ago. The posters feature different images in a gallery-like setting.

BIGBANG debuted in 2006 and took Korea’s pop music scene by storm. During the past ten years, the members have grown into iconic figures in the music, fashion, and mass culture industries.

BIGBANG has a host of mega hit songs: its recently released MADE series songs such as “LOSER”, “BAE BAE”, and “BANG BANG BANG” on top of its old hit songs including “LIES”, “LAST FAREWELL”, “HARU HARU”, and “TONIGHT”. No wonder expectations are running so high for the songs in the group’s to-be-released “MADE THE FULL ALBUM”.

“MADE THE FULL ALBUM” will be released at 12 AM on December 12. The album will consist of a total of 11 tracks, including “FXXX IT” and “LAST DANCE” as double title tracks, a new song “GIRL FRIEND”, and eight “MADE” series hit songs that the group released from May and August last year.

So far, the track list of the album, the teaser images of the new songs, countdown posters, and the teaser videos of the music videos have been revealed.

T.O.P will be starting his mandatory military service in February next year, so it will become difficult to see all the five of them soon. After the release of its regular album, BIGBANG will be attending award ceremonies, appearing on variety shows, and holding concerts to meet fans via diverse channels.

BIGBANG will do a countdown live show on V App at 11 PM on December 11 and reveal the music videos of the new title tracks in advance.