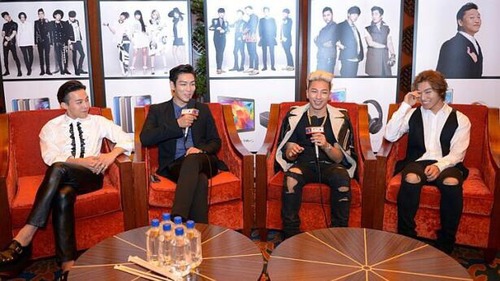 BIGBANG Still Not Satisfied With Efforts on Comeback Album.

Interviews with K-pop stars can be a frustrating affair.

Questions requested by their overprotective management beforehand are often slashed by more than half because they are deemed too sensitive and replies are usually generic and predictable as a result.

This started out the case with BigBang - no questions about their upcoming comeback album or army enlistment were allowed.

But once Life! got the idol group alone for an exclusive interview last Friday night at Resorts World Sentosa, the replies flowed freely and were refreshingly candid at times.
For example, when asked what the best thing about being in BigBang is, T.O.P, the group’s rapper, replies: “When we go to restaurants, they recognise us and they give us extra food.”

He and Taeyang made up for the absence of fellow member Seungri with their easy banter and humour.
Seungri, usually the joker of the group during interviews, was involved in a car accident early last Friday morning in Seoul. The 23-year-old has been hospitalised for a week for treatment after tests revealed mild bleeding in his liver.

As a result, he missed the two-day YG Family 2014 Galaxy Tour: Power In Singapore concert over the weekend that BigBang were here for, along with label-mates Psy, 2NE1, Epik High and Winner. The concert was presented by Samsung.

Leader G-Dragon, 26, maintained a reserved presence throughout the 20-minute interview; likewise Daesung, 25, was quiet and stony-faced throughout.
In January, G-Dragon hinted that BigBang would release a new album in the summer. Last month , at a YG Family concert in Seoul, he said their comeback would happen “this year”.
Now, with less than four months to go till the end of the year, G-Dragon tells Life! through an interpreter: “We can’t actually promise on the exact date but we are working very hard on our new album. The more we try, the more we want to add on and make it better.
“Once we are satisfied with what we have done, we will be able to show it to you.”

Their last EP, Alive, was released two years ago - their fifth since they debuted in 2006. Formed by YG Entertainment founder Yang Hyun Suk, formerly of legendary 1990s K-pop group Seo Taiji and Boys, BigBang started off as a predominantly hip-hop group. They have since branched out into different styles such as R&B and electro pop, both as a group and solo artists.

In March, BigBang made it to second place on Forbes Korea’s Power Celebrity 40 list, after Girls’ Generation. The list ranks stars based on exposure, professionalism and domestic and overseas earnings.

On what the group owe their staying power to, Taeyang, 26, says: “Our secret would be that we have never actually put success or popularity as our target. We just enjoy what we do and we’ve come this far.”

It helps that the members are close and motivate one another, says T.O.P, 26.
“We are more like family, so as brothers, we stay close together and that eventually leads us to influence one another in a good way.”

Adds Taeyang: “We all have different personalities. For instance, G-Dragon produces and writes songs, T.O.P acts and sings, and Daesung works in Japan and does variety programmes. As we do our individual programmes, that pushes us so that we can find our own things to put value into the team altogether.”

Having the freedom to do their own thing in the usually tightly controlled world of K-pop is something that G-Dragon, credited as the creative force of the group, is especially grateful for.
“We are able to do whatever we want to try out. This is very important for us because we do what we really enjoy.”
His second solo album, Coup D’Etat, released last September, featured collaborations with American stars Missy Elliott and Sky Ferreira.
In March, he appeared on electronic dance music producer Skrillex’s latest album.

He says YG’s Mr Yang constantly reminds them to stay grounded.
“As time goes by and as we become more famous and are able to do things the way we want to, it’s really easy to become a bit more haughty.

"So he tries very hard to keep us down to earth and to keep pushing us the way we were when we first debuted. That’s really important and something that we really need."

So where do the group mselves 10 years from now?

T.O.P says: “We still want to be the energetic, hardworking, young men that we are now.”

As for where he sees himself in a decade, he says that he thinks he will be “more settled down, a little bit more relaxed, and a bit more of a man”.
Daesung and G-Dragon both do not think things will change much and they will “still be working hard”.

To which T.O.P turns to him and asks in English: “Do you have a girlfriend?”
Without missing a beat, Taeyang replies with a cheeky smile: “Yeah… I have a million girls in the world… my fans.”


Source: The Straits Times via (Videos: here) via girlstalksmack