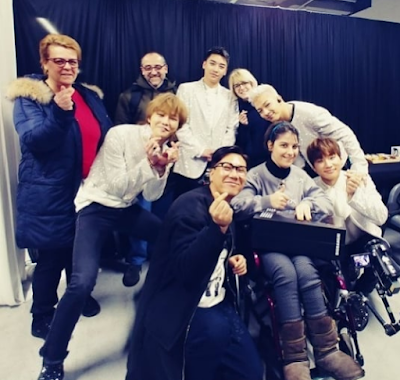 On March 6, BIGBANG members, except for TOP, who’s currently serving as a public service worker, made an appearance on KBS’ “Can I stay one night?”. Since G-Dragon has already joined the army and Taeyang and Daesung will enlist soon, many of BIGBANG fans must have been very happy to members on TV.

On the program, the members met their Italian fans’ family. As you may know, the family had appeared on the TV program months ago, and one of the Italian fans had touched many viewers, singing BIGBANG’s hit “If You”.

G-Dragon, who met his enthusiastic fans and their family backstage at BIGBANG’s concert, hugged them and gave them special gifts. He gave them a signed CD, figures and more. Well, many fans must have envied them.

So, are you curious about stories behind the meeting between BIGBANG and their Italian fans? Check out what the producer of “Can I stay one night?” talked about it.

It was really hard to get tickets for the concert, but YG’s people including Yang Hyun Suk gave us help. And I was very thankful that BIGBANG members visited the family before hitting the stage. They had to adjust their condition before hitting the stage, but they treated their fans so warmly. Actually, I and even YG’s people couldn’t even imagine the members had prepared special gifts for their fans. What you saw on TV was just a part of BIGBANG’s gifts. The members gave the Italian fans their CDs, goods, T-shirts and more.