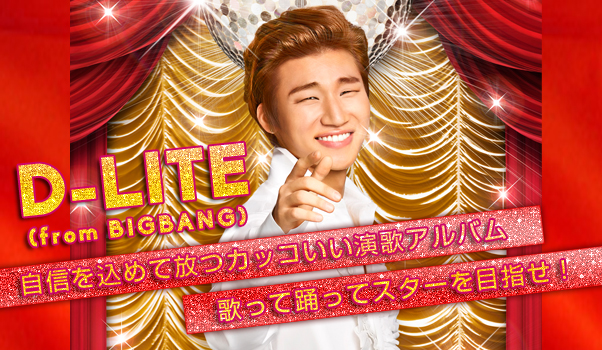 BIGBANG’s D-LITE, a solo singer filled with plenty of poetic sentiments who has covered plenty of J-Pop songs is now venturing into the world of Trot! To raise the atmosphere at Japan’s year-end ceremonies and parties, this “special plan”, D-raito mini album will be on sale from 29th October! “Look At Me, Gwisun” which was composed by G-Dragon and translated by Kenichi Maeyamada to Japanese will be included in the mini album as well. “A Big Hit!”, “Old Diary” by Akiko Wada and “Donimo Tomaranai” by Linda Yamamoto can also be found in the mini-album and these songs will allow D-LITE to completely free himself and let his world explode! Let us listen to what he has to answer for some of the questions about his “album which was completed handsomely”.

If I sing this song in Korea, I will definitely become an instant celebrity and be very popular (laugh).

Q1: From the conception and creativity of your mini-album D-raito to all the works you have released before, D-raito is very different in terms of your singing style and also visually. This sudden change surprised me.
D-LITE: I have actually loved listening to Trot when I was young.

Q2: “Trot”, if I were to use Japanese to explain, is something like enka?
D-LITE: Enka is very similar to folk songs. In Korea, if the whole family were to gather for celebration, there will definitely be singing and dancing along to the national songs. I was determined to try out trot this time. As I have the confidence that I will be able to release a good album, I wanted to try and challenge myself to change my image completely (laugh). I feel like enjoying the process of it will make me look rather suave. Up till now even in Korea, there is no member in any male group who is singing trot seriously as a genre. I am not doing this work sloppily or just for fun. Thus, I feel like I have produced an awesome trot album.

Q3: You have always been involved in variety, won’t you be worried that the image of “D-LITE” that you have built before will be destroyed?
D-LITE: Although I am worried, but once I’ve decided to do it, I must have the confidence that I will do it well. If I do not have the confidence, I will not proceed on with it.

Q4: D-LITE-san in “Look At Me, Gwisun” has been completely released in all aspects.
D-LITE: Yes! In Korea, singing this song will make you a star and also very popular (laugh). The choreo at the chorus is also very easy, everyone must learn to be a singer who can sing and dance at the same time!

Q5: Speaking of movements, D-LITE’s “chest-dance” is also one of the selling points in this song.
D-LITE: The tip is to not use your leg, your abs nor your arms but only exerting strength on your chest and move it. I hereby invite the ladies to only use your chest to move too! (laugh).

Q6: Speaking of ladies, in “Look At Me, Gwisun”, there is a sentence that says “What should I wear to sleep tonight?”. What type of clothing does D-LITE san wants the ladies to wear to sleep?
D-LITE: Erm… Silk! I think the touch has to be dry and that’s good enough. Any design will do.

Q7: In the MV, we are able to see D-LITE wearing his pyjamas and turning into a baby. Which dress-up did you like best?
D-LITE: “Baby D-LITE”. Even I got a shock when I saw that image (laugh). “Ah~ I finally dressed up like this”.

Q8: G-Dragon has also appeared in this MV due to your friendship with each other. That handsome role, was it something you wanted to do?
D-LITE: Nope. Initially G-Dragon was given the role of being unpopular with the women. But he took time out of his busy schedule to appear in my MV so we gave him a handsome role.

Q9: Did G-Dragon say anything about the final product of the scene?
D-LITE: “Not bad” he said, then he laughed.

In a jigsaw puzzle, each piece is different, but when you piece them together, it becomes a piece of art. This is BIGBANG’s charm.

Q10: “A Big Hit!” contains some form of Japanese dialect in it, very interesting.
D-LITE: This is the first time I rapped using dialects. Although it is tough, I still found it interesting.

Q11: Apart from trot songs, you have also covered Akiko Wada’s “Old Diary” and Linda Yamamoto’s “Donimo Tomaranai” with your usual strong and powerful singing style. Is there any difference between the J-Pop songs you covered back in 2013 February’s release of “D’scover”?
D-LITE: The feeling is not the same when you listen to the music. For “D’scover”, I’ve sang the songs originally like how it used to be but with my own colors added in, which is unlike this time round, as I have to really change my style and tone and record specifically. So thus, it is very different based on this point alone.

Q12: So you were portraying an entirely different singing style and range that you’ve never did before up till now right?
D-LITE: Yes. Because I believe it is imperative to produce different sounds and range for different songs. Regardless of “Old Diary” or “Donimo Tomaranai”, the most important point is still “charm”. I have considered in many factors on how I can make my “charm” appear.

Q13: I believe you must have recorded this many times.
D-LITE: In reality, practicing of songs is not just by singing. The most important part is to think of the song’s impression it made on you after listening to the songs. There’s a saying in Korea, “Listen to it ten times, sing it once.” Thus, listening to it for many times then thinking about it is the key. As such, I am always listening to music, always thinking of what the song has left me and proceed with preparations after.

Q14: The piece of work that you created this time out of yourself and the D-LITE up till now, which is the real you?
D-LITE: Both are (laugh). If up till now, what I have always been showing you guys is my side on how I treat music seriously, then this time, it is like my childhood period where I show people the side of me singing songs happily.

Q15: I also particularly like your series of “To-san’s private lifestyle in Hokkaido” summer edition.
D-LITE: It is the same place as in winter. Firstly, we have increased more content as compared to before thus it was tough delegating work (laugh). We had to wake up at 3am to watch the sky and seas. When you guys watch the video, you will definitely feel that D-LITE has grown up in a different place. In this edition, there are also some scenes that cannot be done during winter. This is the evidence of growth.

Q16: After this, it is BIGBANG’s time. You are facing the upcoming 5 dome tour [BIGBANG JAPAN DOME TOUR IN 2014~2015 “X”] in Japan starting from November. Where do you think BIGBANG’s charm lies at?
D-LITE: Firstly, BIGBANG’s biggest advantage is that as we all have solo activities, each of us has strong individuality. It is so strong thus you see us all going solo, but if you stand from afar, you can see that all 5 of us are actually tied together. In a jigsaw puzzle, each piece is shaped differently. But when you place them together properly, it becomes a painting. This is BIGBANG’s charm.

Q17: So I see. In the upcoming dome tour, will there be a chance of us seeing D-LITE perform some of his solo works?
D-LITE: That is still a secret (laugh). We are still in the midst of discussion but rest assured that it will be an awesome concert. We’ve listened to songs we don’t really listen. We are thinking of bringing a different dance stage choreo as well all because we want to bring a different vibe to our audience that will differ from our previous dome tour. Please wait in anticipation. 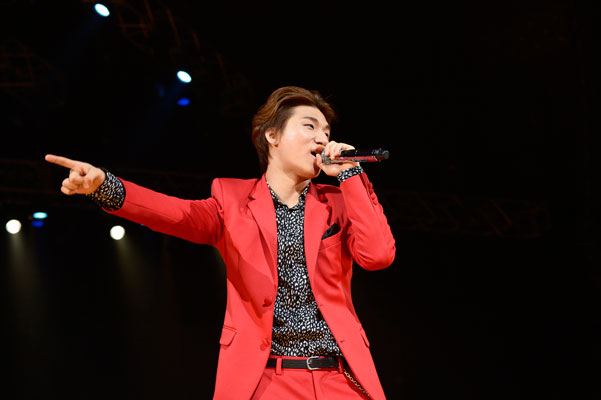