Below is a translation into English with special thanks to Mina @kwonaventure (Twitter): 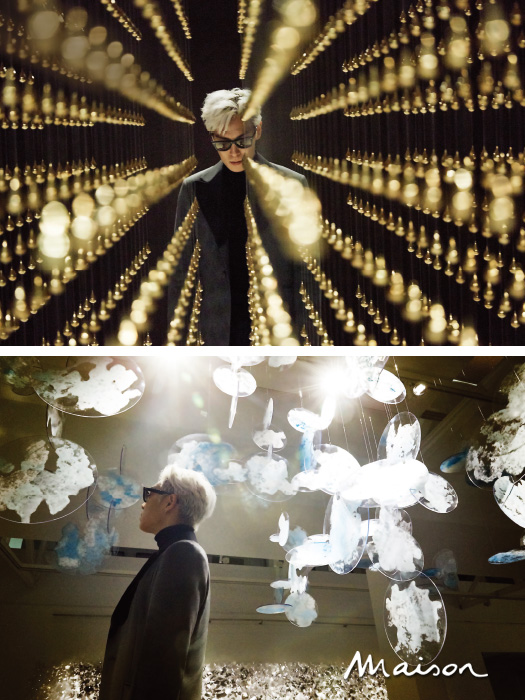 The international art fair “Singapore Art Week,” celebrating its third year, was held in Singapore from January 17–25th. With the Singapore Marina Bay Sands Convention Centre as its centre, this event was held in museums lined up across Singapore, and was established as an important event that could survey the trends of the Asian contemporary art market, and warrant the participation of even local galleries. TOP visited this place in order to receive the Visual Culture Award at the 2nd Prudential Eye Awards, which was overseen by the British Saatchi Gallery, Prudential Life Insurance, and Parallel Media Group, and was intended to discover and sponsor up-and-coming Asian artists. According to the word of mouth of design and interior reps, TOP was a collector who’d amassed 80 chairs, and was the owner of a house furnished with designer furniture.

He had enough affection and deep understanding for design to incorporate designer furniture with a perceptible expert’s insight into his music video, and I wondered where that affection and understanding came from. TOP said, “I started collecting designer furniture in my early 20s. In the beginning, I liked modern design that was dressed up in an organic aesthetic like the designs of Mark Newson or Ron Arad, but as the years passed, I gained interest in vintage furniture with a timeless appeal, like that of Charlotte Perriand, Jean Prouvé, Ico Parisi, or Gio Ponti.”

TOP thought that he has to become an artwork-like person in the flood of quickly changing trends, and for him, art and designer furniture were both things that inspired him, and were also his only escape from stress. It seems that he realized early on the fact that art plays a role as a window into human emotions, and gives the ability to world from a different perspective. For TOP, art and design were a strength that sustained his life and music. And while we conversed, I could feel his passion in his intensely sparkling gaze whenever the discussion turned to topics of furniture or design. TOP said, “If I make 100 won, 90 won will go towards purchasing furniture and artworks. At some point, I developed this habit after losing excitement towards my work and lifestyle, because this habit is an earnest means to manage my life, to the extent that I put my all into it.”

TOP thinks that rather than venerating the furniture or artworks he likes as untouchable idols, he should use them directly in his daily life. I was also curious about whether there was substance to the rumours that TOP’s house is amazing, to the point of constantly hearing people express the desire to examine his house. I asked about his house interior, and he said, “One of my treasured chairs is a 1970s vintage Proust chair designed by Alessandro Mendini. Because it’s not a chair dressed up in a multi-coloured fabric, but rather a chair that’s been painted directly, when I put it in front of a blank, white wall, the whole space became like an artwork. In the kitchen, I hung a Murano chandelier above a Jean Prouvé table. Around it, there are sculptures that the Japanese artist Kohei Nawa made for me, and drawings on the wall that he came to paint for me in person.”

TOP also mentioned his personal flair and know-how in interior decoration: “I think that around a leather sofa, you have to mix metal, stone, wood and fabric materials. Because I think that each of these materials has their respective strengths, and when you combine these elements into one, the space becomes filled with a good energy.” Under TOP’s direction, from time to time the furniture and artworks he’s collected become the leading pieces of a new spatial layout through repeated rearrangement.

During his stay in Singapore, TOP went to the Singapore Tyler Print Institute printmaking workshop, and looked around the Singapore Art Museum, Ikkan Art Gallery, and Art Stage Singapore. On this journey, he was accompanied by the Japanese artist Kohei Nawa and the freelance curator, Lee Youngjoo. TOP said, “Perhaps because Kohei Nawa and I both share the common need to create something through art or music, we can converse well despite our 12 year age difference. We don’t only talk about art, but also about music recording.”

While looking around the galleries, he kept taking out his phone to take pictures whenever he encountered an artwork that he liked. When I asked him about an artwork that’s deeply impressed him, he cited Singaporean director Ho Tzu Nyen’s ‘The Cloud of Unknowing’ (2011), and shared his thoughts, saying, “Although it was an experimental piece transcending space and time, it was awe-inspiring and impressive video.” In the Ikkan Gallery, he inspected the flower video artwork, ‘Moving Light Roving Sight’. As if lying down on the flowerbed projected onto the floor by the colourful flower-themed video, TOP created the impression of giving a brief, one-man performance. Throwing his body into the vast ocean called art, the exhibition hall was imbued with playfulness at the actions of this innocent youth.

TOP said, “In terms of painters, I like the artworks of Britain’s Francis Bacon and Cecily Brown, and America’s Mark Rothko. When I first saw Mark Rothko’s work, it was as if I was looking at a turned-off television whose meaning I could not understand. But the more I looked, the more I found that there was a black hole sucking me in within the painting. It seems that this kind of pleasant experience stimulates me in a way that makes my heart race.”

Right now, TOP is in the midst of preparing two kinds of projects. He is scheduled to act as co-curator with curator Lee Youngjoo at the aforementioned Asian artist group show, and select the works of Korean and Japanese artists for exhibition. TOP said, “In the view of some curators, you could say that this arrangement is exploiting the public awareness of my status as part of an Asian boyband, and it might look like unwarranted favoritism. However, it wasn’t planned with the hope of economic benefits, but rather with the desire for my curatorial collaboration to become a window that opens up a wider market for emerging Korean and Japanese artists.”


And another project of TOP’s is his collaboration with Vitra Museum. He said, “The chairs I’ve created are sexy chairs inspired by Dali’s surrealist paintings, and they are shaped as if a metallic syrup is flowing through them.” These chairs will be publicly showcased in August, and they are also scheduled to be exhibited in the Saatchi Gallery in September. “I’m both nervous and also expectant about having made these chairs, which have a personal meaning in an age where the boundaries of design and art are breaking down.” Right now, TOP is in the process of meeting weekly with the Vitra team to complete the final design work for the sake of making a more perfect chair design.

He’s in charge of rap in his group, but TOP enjoys listening to jazz and blues. He enjoys Frank Sinatra, Ray Charles, and 1960s blues music. TOP said, “I often listen to classical music like Bach, too. It’s not that I’m trying to be snobby, but as I was doing hiphop since I was young, it seems that there’s some kind of hidden, fierce will trying to break free from my heart. That’s why, after strictly organizing my interior and my exterior by occasionally listening to classical music and wearing tense suits, I find that my heart becomes lighter.”

It seems that, like the taste for listening to music from the 1950s and 60s, at some point the passionate youth of his late 20s realized the fact that design and art that transcend time are well-loved for a long time. Because I expect that BIGBANG’s TOP, or rather Choi Seunghyun, who is deliberately climbing step by step towards his dream of becoming a gallerist, will reveal his true form from now on.