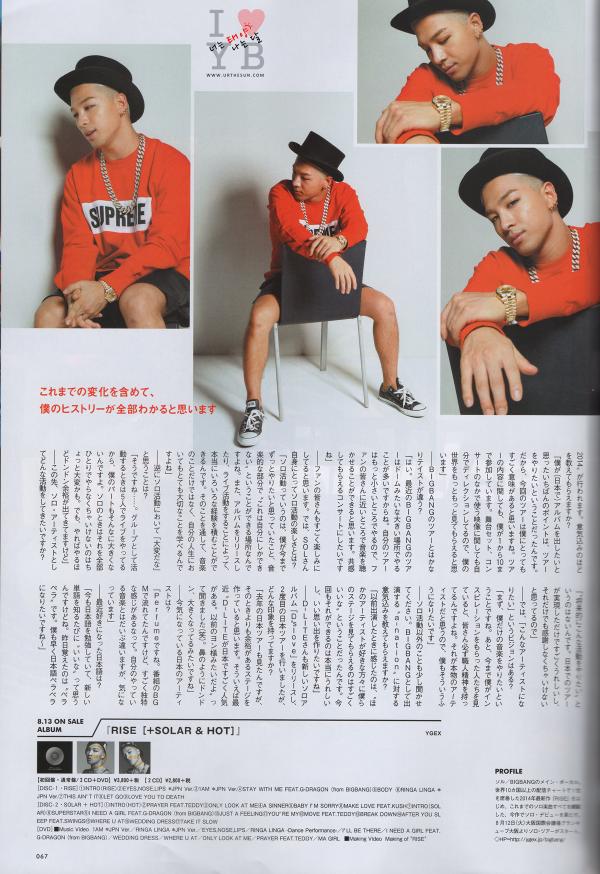 Opposite to his sound where you can feel his strength, we look at the sweet side of the surprisingly honest SOL (from BIGBANG)

SOL is a vocalist for BIGBANG, a group who’s developed an avant-garde sound. His new solo album is one that can be approached from many different angles. Following D-LITE’s feature, he will be featured on MUSIC ON! ‘s music information TV program, Latest Breaking Entertainment Time CDET! He has a gentle nature that you wouldn’t imagine from hearing his music.

When I entered the studio, SOL had just finished an interview with a fashion magazine, “What’s the concept of the album?” ” What’s G-DRAGON to you?” “What’s your favorite part of your body?” “What type of fashion do you like on girls?” “What’s your favorite part of your room?” SOL politely answered each question, intermingled with gestures. He seems to have improved his Japanese.

He waited until the time was ripe to make his Japanese debut with the album [RISE(+SOLAR & HOT)]. This album contains the Japanese version of EYES, NOSE, LIPS and RINGA LINGA. While he’s starting his full-blown Japanese activities with this album, he’s also recapping his entire career with his complete best. This was a promotion day for him but he clearly conveyed his musicianship, world view, and identity as an artist.

Your debut Japanese album [RISE(+SOLAR & HOT)] was released. Can you tell us the most important part about it?
This is my first Japanese album but because both of my old albums SOLAR and HOT and the new album RISE are on it together, when you listen to it, you’ll understand how I’ve changed as both an artist and my way of expressing myself, as well as my history.

With your music up until now, you’ve changed quite a bit musically?
I have. For example, with my first album HOT I displayed my strong colors but RISE is a work that took a long time to make. Because of that, various genres and colors appear on it. Putting it all together, you’ll feel its various emotions.

I’m impressed you’ve expressed yourself in various genres like hip hop, EDM, and rock. Do you normally listen to these different types of music?
I do. I think there are many who feel that “this one way is how I should sound,” but my attitude towards music is basically, “what’s good is good.” Actually, if you line up my favorite songs all together, you’ll y’re all different genres.

From August to September, you’re having your first Japanese tour [SOL JAPAN TOUR “RISE” 2014]. Can you tell us what you’re enthused about?
The biggest reason to release my album in Japan was because I wanted to have a tour. So, this tour has a lot of meaning to me. Regarding the contents of the tour, I participated from beginning to end. The set design, the clips used during the concert, it’s all under my direction, so I want you to see even more into my world.

This tour has quite a different feel than that of your BIGBANG tours?
Yes. On our recent BIGBANG tour, we performed in many huge places like domes. Since I’m having mine in smaller venues, I want fans to be able to hear the music from a closer space. I want to have my concert like this since I empathize with the fans’ position.

I think the fans must be really looking forward to it. SOL, what about your solo activities do you find enjoyable?
Solo activities were something I’ve been wanting to do forever, with the music portion, it’s an area where I do the things “only I can do.” Again, I released an album, and due to holding concerts, the various experiences have really added up. So it’s not just about the music, I’ve learned very important things for my life.

On the other hand, what do you think is “tough” about your solo activities?
Hmmm, when we perform a concert as a group it’s 5 people, so my part isn’t that big. When it’s a solo I have to do everything, so it’s a bit tough. But the more I do it, the more composed I am.

What would you like to do as a solo artist?
I don’t have anything I’d like to do in the future. I’m just happy my Japanese tour was able to be realized, just for that I’m grateful.

What vision do you have of “the artist you’d like to become like”?
Well, I’d like to only do my own music. If you look at my inspirations up until now, they all definitely have an artisan mind. I feel like that’s a true artist, and I’d like to do my music in that way.

Let’s talk about something other than your solo activities. Regarding your performance with BIGBANG for a-nation, what are you excited about?
When we performed there before I thought “It’s great that people who like different artists can see our performance.” This time I still think that’s great and I want to make good memories.

D-LITE released his second album D’S LOVE and is holding his second Japanese tour, but what impression do you have of his work?
I saw his tour last year but I think this time around he’s made stages that are more composed. Come to think of it, recently I heard ” D-LITE’s been getting popular in Japan, He’s like Yon-sama was back in the day.” (laughs) Like his nose, things have rapidly opened and he’s become a big deal

What Japanese artist have you been into lately?
Perfume. I heard them as the background music for a show, but it had a really unique feel to it. It’s considerably different from the music I do, but I’m into it.

What recent Japanese word do you like?
I’m studying Japanese now, and whenever I learn new vocabulary, I’m like “that’s a good word”. Yesterday I learned the word perapera (fluent). I want quickly become perapera in Japanese.