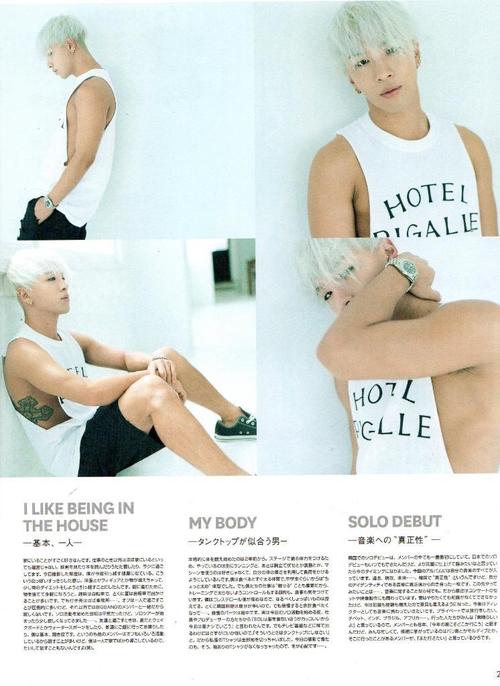 nothing to do ~My secrets~

Not only seen in Asia, BIGBANG is very popular worldwide, having toured through various nations around the world. That groups’s main vocalist, SOL had his Japanese debut in August. As the ultimate “momu-chan” (having a well trained beautiful body) and a devout Christian, you will come to see his genuinely original view of the world.

Born May 18 1988. Birthplace: South Korea. Blood type B. Active as the lead vocalist of the popular group BIGBANG. In 2008, had his Korean solo debut with the mini album [Hot]. 8/13 of this year he debuted in Japan by releasing [RISE(+SOLAR +HOT)].He had his first solo Japanese tour. With BIGBANG will have their second consecutive Japanese tour starting in November

-The foundation, is being by yourself-

I really like being at home. Whenever I’m not working I’m usually at home. I watch movies, read books, nap. I spend my time at home with ease. Next time I move I’d like to have a room like the one we’re using for the shoot. I like the white-on-white feeling. My clothes, figurines, and things have increased, I have decided to go on a “diet” of sorts when I move. In order to move forward, by throwing things away I will become lighter. One of my hobbies is biking, I often bike around in the summer. But, I usually end up going to the office….Being by myself on my off days can happen overwhelmingly frequently but apart from that I’m with the other BIGBANG members so I’m not lonely. At the beginning of my solo activities I was fine, but when my solo tour started I became a little sad….When I spend time with friends, in the summer we’re doing things like wake boarding, and other water sports. Normally, we just go out to eat. Usually I play the listener’s role. When the other members are off, they often do various things and have a lot to talk about but since I spend my free time at home, I don’t have much to say (laughs).

-A man that looks good in tank tops-

I started really training about two years ago. In order to increase my stamina while dancing on stage. I mainly run, afterward I’ll do push-ups or sit-ups. Since I don’t like using machines, I’ll use my own body weight to train. I’m predisposed to gain weight whenever I eat so from middle school I had a “chubby” body shape. But because being able “to charm” is a necessary part of our job, the goal of my training is to control my weight. I pay attention to what I eat. In order to not increase my cholesterol, I refrain from salty foods. Korean food is typically salty, but I do my best to not eat too much of it. The body part I’m most proud of is my back. Truth is, before my solo activities started, YG and my producer told me “You’re more attractive when you’re not wearing clothes, so this time you won’t be wearing any.” But since I obviously can’t be naked on television shows, “During those times you’re wearing tank tops.” That’s why they cut off all the sleeves of my t-shirts. For this shoot I’m wearing one too. I don’t have shirts with sleeves anymore, so I’ll be in trouble come winter….

-The “authenticity” of his music-

Out of my members, I was the first one to have my solo debut in Korea.I could have had my Japanese debut whenever, but I wanted everything to be perfect, so now was the right time. This album has all of my music on it. Past, present, future…. In Korea they call it “authentic” but one of the CDs is the complete opposite of music that had my own identity within it. The stuff I did before….my thoughts concerning music, are completely different now. That’s why recently I’ve been more involved with my concert’s setlist and music videos. In the past I wanted to be more involved, but I didn’t know how to be. Now, since I know how and have more experience behind me I’ve began offering my opinions. From now on, I want to participate in directing my music. Privately, I’d like to do some traveling. To places like Tibet, India, Brazil, Africa…. because people who’ve gone there always say “It was amazing.” Every year me and the members are like “Let’s go somewhere this summer,” but everyone ends up being busy. Contenders that have risen to the top of my list are Bali and the Maldives. The members that have been there have said “I want to go back.”