Part 4 of full broadcast and END: 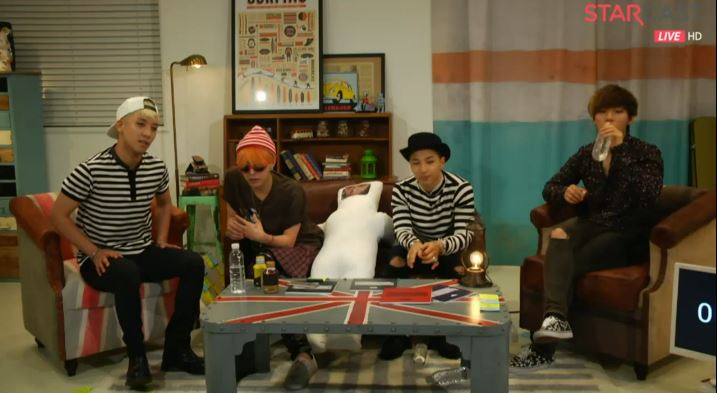 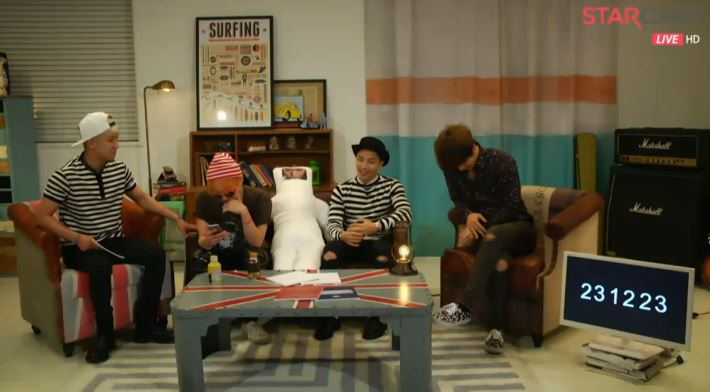 GD: *touching RI's arm* did you get some weight these days? RI: It's not that,

worried if we'll be not funny here w/o him.

GD: You just heard the song, IF YOU. It's the music BIGBANG has never tried,

it's not all ballad, but kinda old.. pop?

TY: IF YOU is my mother's favorite. GD: Mr. YG really likes this music. It's

GD: People in their 30s really loved the song IF YOU when we played this song.

You can hear TOP's vocal.

DS: IF YOU is a good music.. to the people who've experienced love.

Y: IF YOU is a good music to someone who's trying to break up w/ someone. on a

rainy day, in a car.

TY: The concept of this D album is supernaturalism. You'll know when you watch

the MV of SOBER.

GD: SOBER is a good music when you're in a hard situation bc of your lives,

stuffs...When u want to throw off everything.

hearing SOBER. GD: You're a genius!

TY: In this photo, it looks like we're really relaxed but actually we were

really in a big hurry. The sun was going down!

TY: Yeah the sun was going down and we were really in a hurry to take the shot 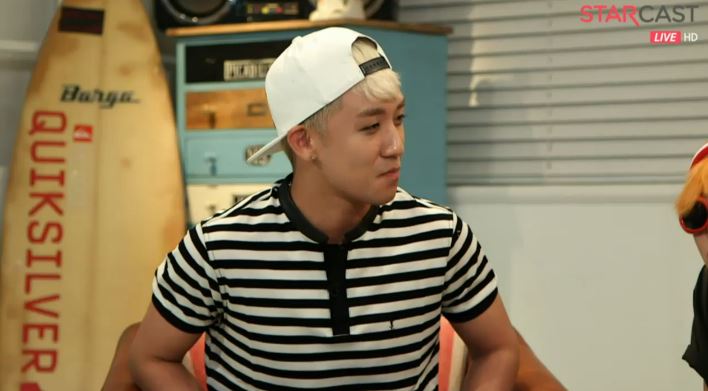 BAEBAE MV* GD: If we really wanted to make that Rated R, we should have DS in

the MV full time. DS: What are you saying!

GD: I didn't even know now we're using the card thing to take subways! and we

get 500won back when we return the card!

GD: Watching that cover-dance video, TAEYANG there! I thought he can do our

RI: It's not that easy, this thing. *the spinning structure thing*

DS: I hope you'll love this song, the song's good not only when you're sober

but also you're not. LOL 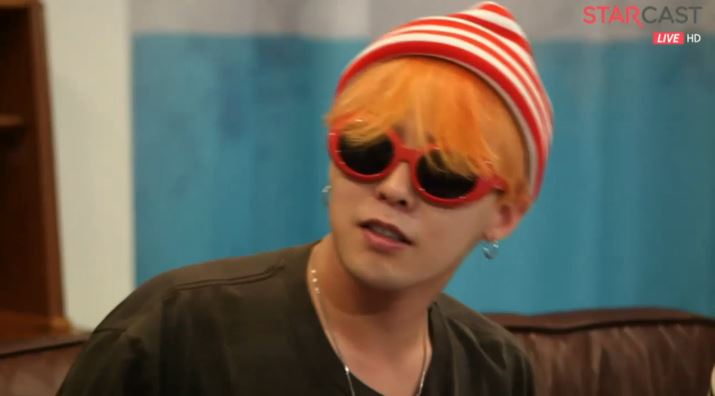 GD: If we'll out here to hang out, we should do this.

TY: Some say my hair looks like a mop, but it's too cruel. It took 8 hrs for

me to do that hair!

DS: Yeah we called the Japanese hair stylist to do that hair. TY: I.. don't

RI: GD and I did the rock scissor paper thing and who won would kick the one

GD: Last time RI showed TOP's number on a camera by accident. but I'm not an

GD: That spinning structure! I almost threw up in that..
RI: I was rolling in there like this!
TY: Sadly it's edited... 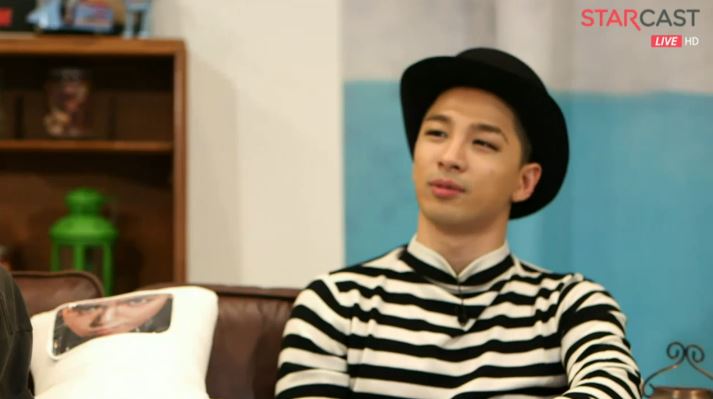 GD: We really had fun there filming the MV. TY: The island. I heard we were

the first one who filmed on the island.

TY: The island is actually where people study plants. 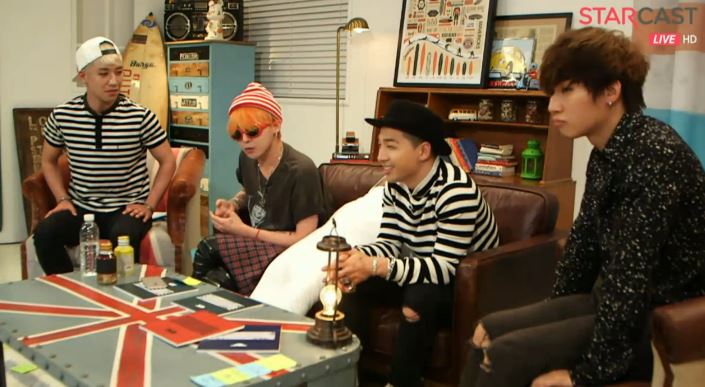 RI: Fans want GD to do the love consult thing on his Naver tv! GD: I can do

LOL RI: I don't worry much when dating LOL

RI: Fans want GD to do on-line shopping? DS: GD has to pay the money! RI: Is

this t-shirt good? GD'll send u as a gift!

GD: I thought that I'll do this. I'll put a bottle of alcohol in front of the

monitor, and I'll talk and drink. 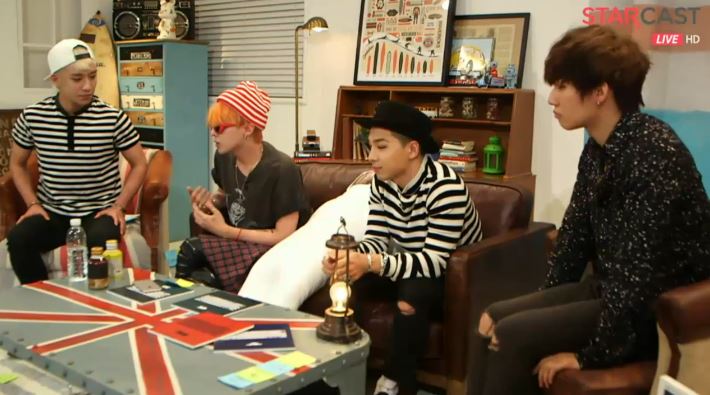 GD: Then at the end of my tv, I'll be really drunk! You'll feel you're having

GD: I can tell you my secrets since I'm drunk, I can do the love consult

TY: Well I have a lot of thoughts. I didn't decide what to do yet.

uploaded the photos. TOP: I had some time, so..

TOP: What's that strange doll thing you're holding? GD: idk they gave us this

RI: You'll watch the video introducing the app called "V" by NAVER. you can

RI: INTL fans can use this app. So please look forward to it.

BB are saying "I had a dream, a scary dream." in a cute way. It's popular in

everything. GD: ur pronunciation got better...

GD: For the mood of IF YOU, we should calm ourselves down, how about start

crying a bit? *getting serious

TY: RI sang really well. RI: I did? I sang well? TY: better than any other

RI: When recording IF YOU, GD was easy on me. He said just do what I wanna do

first. Why did you.. were u just tired? LOL

GD: IF YOU is a meaningful song to me. We were all once in love. The song was

GD: I really wanted to write this kinda song, as BIGBANG's music. This hasn't

tried before as BIGBANG's music. 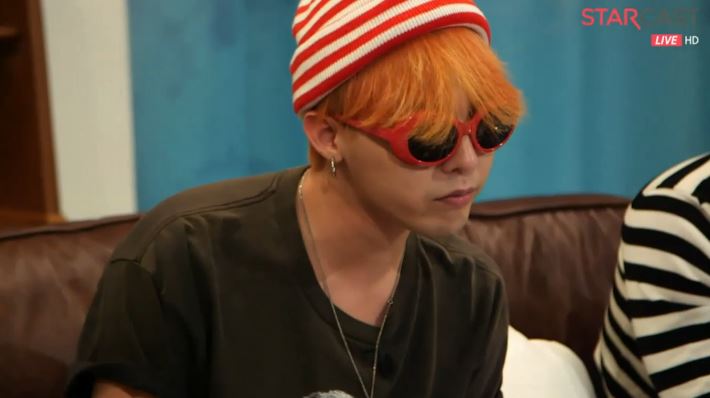 GD: I really like senior musician, San Ul Lim, and they did this kinda music.

This can't be compared to their music but..

GD: I really like San Ul Lim's Reminiscence. I really wanted to write that

GD: Recording IF YOU, our voice is not in good condition. kinda intended that.

To sing this kinda sad song when relaxed.

GD: <IF YOU> is different from BB's usual style. It's not really like a ballad

but more like an old song. YB: My mom loves it.

GD: You can hear TOP’s vocals in <IF YOU>. Taeyang: I think TOP’s voice goes

very well with the song <IF YOU>

GD: *looking at TOP pillow* TOP looks too angry. What can we do to make him 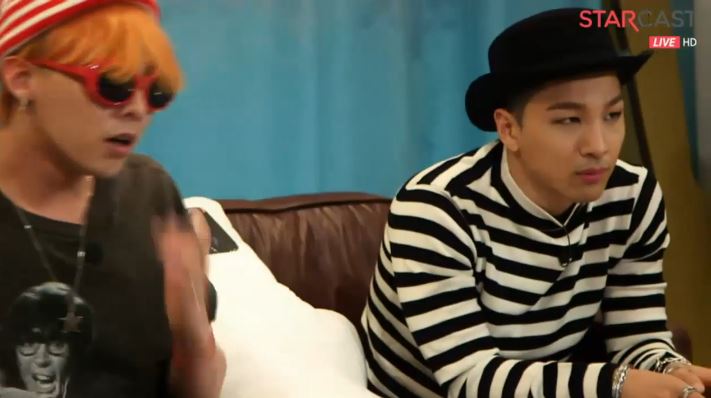 YB: SOBER is totally different from IF YOU. It's very upbeat,cool & it will

make u want to dance. SR: It's a song everyone can jump&dance to

DS: You know how we're at D in the MADE series? So the song SOBER is MAD G:

GD: People say that BAE BAE MV is too explicitly 19+, but if we really wanted

to make it sexy and 19+, we would've just filmed Daesung!

GD: TOP still looks so angry!! What should we do? Should we call him? YB: I

don't think our fans miss him that much *jokes*

SR: I wanted to connect and communicate with the public so I went on the

subway, but no one recognized me.

*TOP doesn't answer his phone* GD: Why isn't he answering my call?

SR: People always ask me what the 5X5 is in BAE BAE. GD: We thought it was the

most beautiful age for young love and also fun.

GD: I saw a BANG BANG BANG cover, and the guy that did Taeyang was so good. I

thin he can sub in for Taeyang when he's tired.

so he came to see us. Thank you TOP hyung. BANG BANG BANG!

YB: Someone told me that my hair looks like a cleaning mop in the MV. I spent

8 hours on that hair. Whoever said that, I hate you. *jokes* 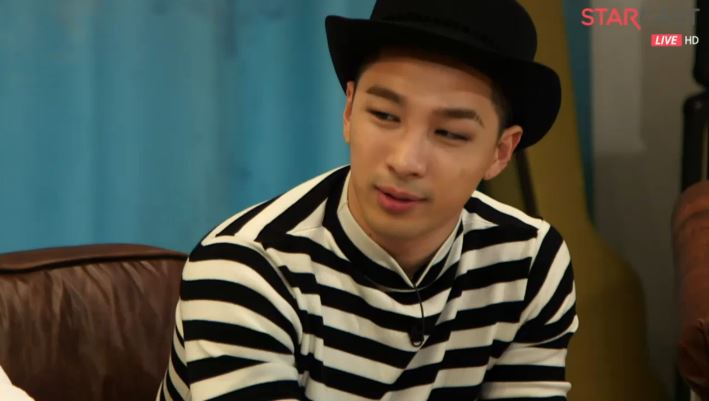 LOL Bigbang chanted "Game is only a game, let's not misunderstand" before GD

YB: When you call someone, doesn't it only show their name? GD: He probably

doesn't have TOP's number saved. They're not close enough*jokes*

SR: A fan asked GD to give relationship advice! GD: Sure. I can give you some

right now. SR: I don't have any problems/worries right now.

Fans recommend that TOP should do "Virtual Boyfriend for the day" themed show,

GD: For my show, I’ll bring a bottle of alcohol. Then I’ll talk about

everything and get so drunk, you’ll feel like you had a drink with me.

TOP: Hello. This is TOP. Nice to meet you.
SR: What are you doing, hyung?
TOP: I'm in japan today for drama filming.

posts. U ate good stutt for dinner. TOP: yup we had a good dinner

GD: Do something funny! Do that thing u always do! TOP: *imitates some1* GD: I

won't tell who it is, sorry for laughing by ourselves

TOP: I can't really stream right now since I'm overseas but I saw some

screencaps. What is that shabby doll of me? It's crappy!

GD (to TOP): Your eyes are very big. Your nose is very hadnsome. Yoru lips are

also very pretty. Your eyebrows are long too.

love to IF YOU and SOBER! GD: Bye~ Bbyong!

Your pronunciation of "everything" improved, did you practice?

GD: Sorry, I was too deep in my feelings listening to IF YOU. Under my

SR: A fan said, "IF YOU sounds even saddder since I broke up few days ago" GD:

Why? If ur having a hard time, watch SOBER MV and cheer up!!

SR: We will see you guys again in August with our individual live shows! 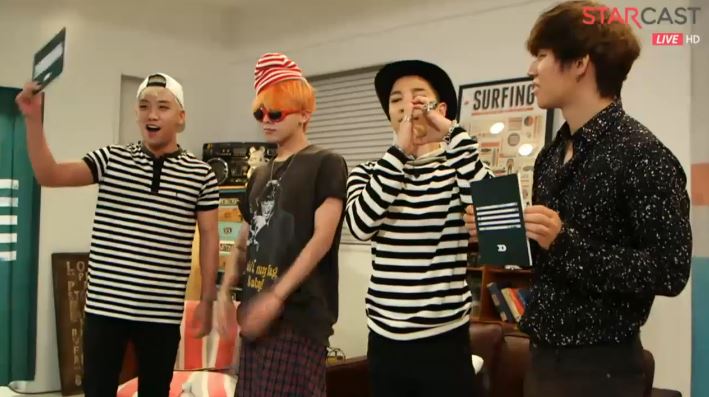 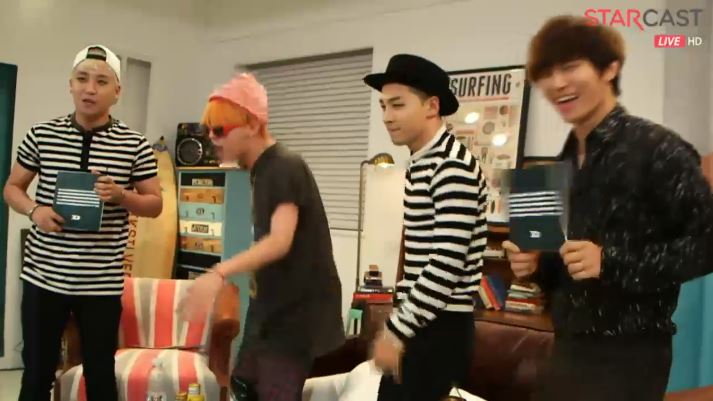 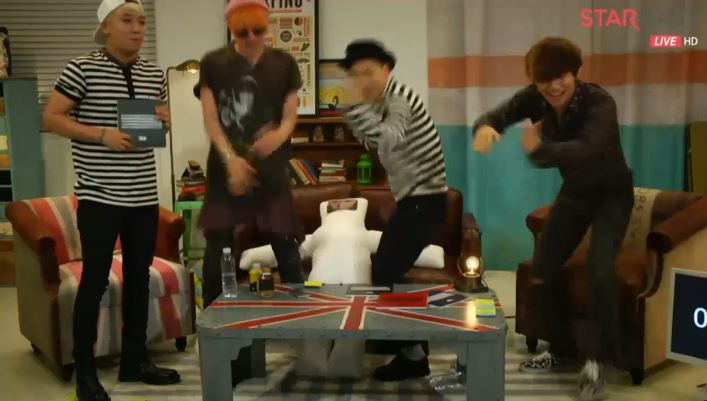