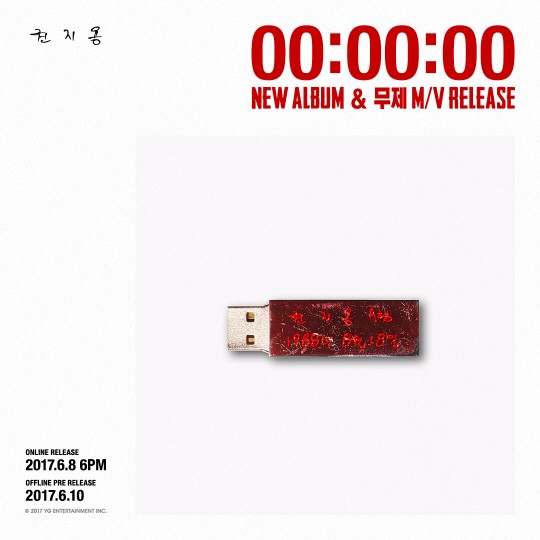 [스포츠 동아=김원겸 기자] There is a heated debate about G-DRAGON’s recently released USB album. The “KWON JI YONG” EP will be sold offline from June 19 only in USBs. The Korea Music Content Association (KMCA) announced its preliminary judgement that it is difficult to accept G-DRAGON’s USB album as a proper album, and now, this has become a hot potato in the music industry.

This all started when Sports Donga published an article on June 15 titled “G-DRAGON’s USB. It is an album or not? That is the question.” The music industry and the public started taking an interest in the change that G-DRAGON’s USB album might bring. Already, many people see his USB album as the beginning of the fourth revolution of albums: the transition from LPs to cassette tapes, CDs, and now USBs. G-DRAGON and BIGBANG have received spotlight for combining diverse areas of art, such as fashion and visual arts, with music.

Indeed, G-DRAGON kick started a revolution in the album industry, and his agency set out to explain the background, meaning, and value of G-DRAGON’s USB album in a Q & A format.

- Why did G-DRAGON release an USB album?

“Simply put, the aim is to provide more diverse contents in addition to music. A regular CD is about 700 megabytes, and that is barely enough space for 20 songs. We can’t even have a single high definition music video in the CD. G-DRAGON’s USB album is four gigabytes. The USB is big enough to hold dozens of songs and high definition music videos. And it is the most portable device out of all other music storage devices.”

- What is in G-DRAGON’s USB album?


“When you put the USB in a computer, you can follow the link and gain access to a website. The website provides not only music but also G-DRAGON’s pictures and music videos, which can be downloaded to the USB until the end of this year. The website provides the official music video of “UNTITLED”, a different version of the music video with G-DRAGON wearing a different outfit, and the making video. These are only provided to those who buy G-DRAGON’s USB album.

“With CDs, consumers can’t add or delete music. But, G-DRAGON’s USB album is not a consumer good that needs to be dispose of after one use. Consumers can actually pick and choose what they want in the album and delete what they do not want too. It is a revolutionary method of providing musical contents. No one listens to music with a CD player these days. But, album sales are still a big factor when calculating chart scores in music shows. Now, an album is not a means to listen to music but more like “goods” for the fans.”

- What is YG’s position on the controversy about whether this can be considered as an album?

“YG doesn’t have complaints about the way Gaon compile data for its chart rankings. YG is more interested in new music and the new world. We think that the whole issue is a structural problem, those holding on to the old way of thinking and not being able to accept the changes that are happening right now. G-DRAGON chose to release an USB album to give more to his fans such as videos and pictures. So, it very difficult to understand why some people would want to confine music storage devices to only CDS. Even those in their seventies and eighties don’t listen to music from CD players, and it’s hard to find places to buy them. Most people use USBs or hard disk drives, and not CDs, to store data. Why does music have to be stored only in CDs? This doesn’t make sense.”

On June 15, G-DRAGON put up a post on his Instagram page titled “What‘s The Problem?” to express his views on the matter.

“Who gets to make the final decision on whether the product of an artist is an album or not? Cassette tapes, CDs, and downloadable files. They all have their merits and demerits. Devices change, but the most important thing is the melody and the lyrics that can stand the test of time and stay in people’s ears, mouths, and minds as something precious and comforting.”