Here is the full context:

- He and his associates connected to the Burning Sun club have been accused of having police ties.

- Police are seeking an arrest warrant for an ex-policeman accused of acting as a broker. 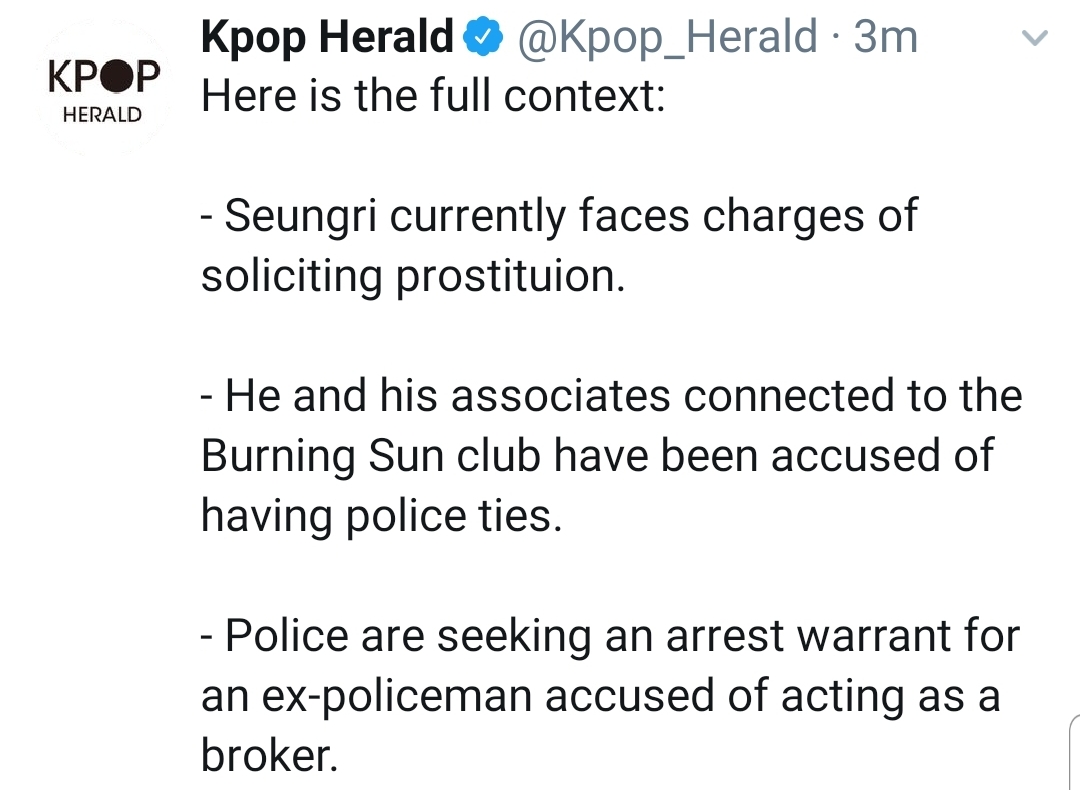 Press never reported about it & during the time where idols r supposed to reflect after a DUI, he carried on w/his entertainment activities as if nth happened. Choi Jonghoon kept in close contact w/that police officer & sent him bday greeting. He mentioned this in the group chat

[anchor]
Another entertainer of the group Katok room, which includes Victory and Chung Joon Young, YTN reported that FT Island Choi Jong - hoon asked the police to stop the report after he was caught in drunken driving.

I have posted this with the nuance that the police have seen behind the group cars, and I have been doing entertainment for three years without any problems.

I will connect the reporter to find out more. Park Gwangryul reporter!

I asked you to stop your being informed about your drunken driving. Tell me more.

[reporter]
The party is FT Ireland's leader and guitarist and keyboardist Jonghoon Choi.

Choi was caught by a police officer belonging to Yongsan Police Station in Seoul after drinking alcohol and taking the steering wheel.

It is not known exactly whether the license suspension or cancellation was made, but the sanction standard of blood alcohol level of 0.05% or more is clearly passed.

Choi asks the police in charge.

It seems to be concerned that there is obstacle to the activity.

Actually Mr. Choi's drinking and driving fact has not been reported anywhere.

Other entertainers have been drinking for three years while drinking alcohol and finding time to bow their heads and have a good time.

Choi has been known to have kept intimate relationships since he sent a congratulatory message to his police officer's birthday.

Mr. Choi has posted such information in a group camp that has Jung Jun-young and victory.

I talked proudly with the nuance of the police behind me.

However, it is known that there is a story that the other high-ranking officials of the police also look at their convenience in this dump.

Police are planning to investigate whether there was a coincidence at the time of the suspicion.

Prior to Mr. Choi's agency, FNC Entertainment made it clear that Mr. Choi was not involved in the case, saying that he was present at the request of the police for investigation.

We have been hard-pressed to respond strongly to rumors.

[anchor]
Chung Joon-young, the investigation on victory is going to be going on tomorrow?

At the time, he was a lioness in the blood, but now he has been turned into a suspect for the charges of sexual hostage.

The contents of the Kakao Talk conversation, which instructs a club in Gangnam to provide a place for foreign investors, is subject to investigation.

Chung Jun Young also appears to be in the police on the same day as victory.

It is less than 48 hours after I stopped shooting and hurriedly returned home.

Police have confirmed that Jung has wrestled with suspicious videos of sexually assaulted Jung Hoon and his friends, and turned Jung into a suspect.

The police are also in the process of seizing a private repair company in Seoul, Gangnam, Seoul, where the mobile phone was repaired three years ago.

In the meantime, Burning Sun was also charged with arresting a former police officer, Gang Mo, who was suspected of playing a role in the alliance.

Police, who were denied the warrant, said that Burning Sun co-representative has secured a statement saying that Mr. Mo gave money to Mr. Kang and confirmed the circumstance of "countermeasure simulation" such as CCTV.

In addition, the police have been informed that police officers in Seoul Gangnam Police Station have presented their police IDs and visited the club from time to time.