G-Dragon and Jung Hyung Don Talk About Their Relationship, Taeyang Says He Wants In 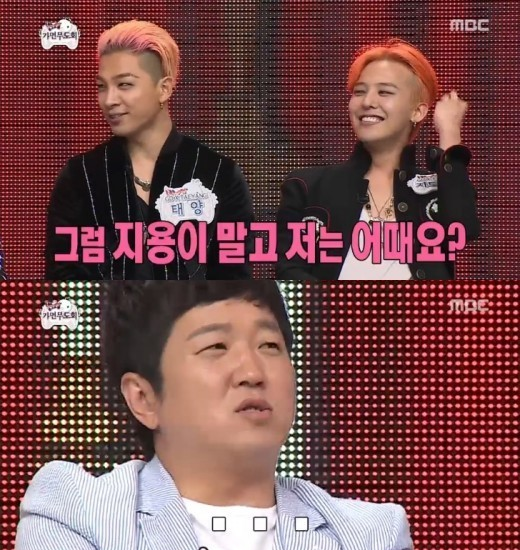 On the latest episode of “Infinity Challenge,” Jung Hyung Don and BIGBANG’s G-Dragon touched on the topic of their seemingly faltering relationship since being partners for the previous “Infinity Challenge Music Festival” in 2013.

During the July 11 broadcast of MBC’s variety program “Infinity Challenge,” the show’s cast members took to the stage and performed in order to be paired off with the guest singers for the upcoming music festival.

On this day, Jung Hyung Don pointed at G-Dragon and joked, “If it’s someone like GD, he’s perfect to play around with just once.”

After hearing this, Yoo Jae Suk turned to G-Dragon and asked, “How do you feel about Jung Hyung Don saying he raised you?” The BIGBANG member casually replied, “I just want to let him think that. If it makes him happy,” turning the set into a sea of laughter.

However, Jung Hyung Don didn’t flinch at those words and carried on saying, “It just got tiring…his style,” adding to the laughter.

In the midst of this ‘love fight,’ Taeyang stepped in and asked Jung Hyung Don, “Instead of G-Dragon, how about me?”

Jung Hyung Don, pretending to be fed up, responded, “Why are you being like this too?” Taeyang continued with his love call, “I’m really drawn in. [Jung Hyung Don] has a strange charm and I want his attention too,” causing more laughter. 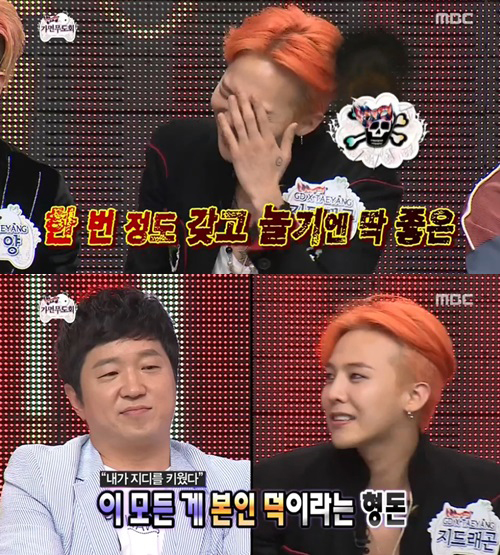