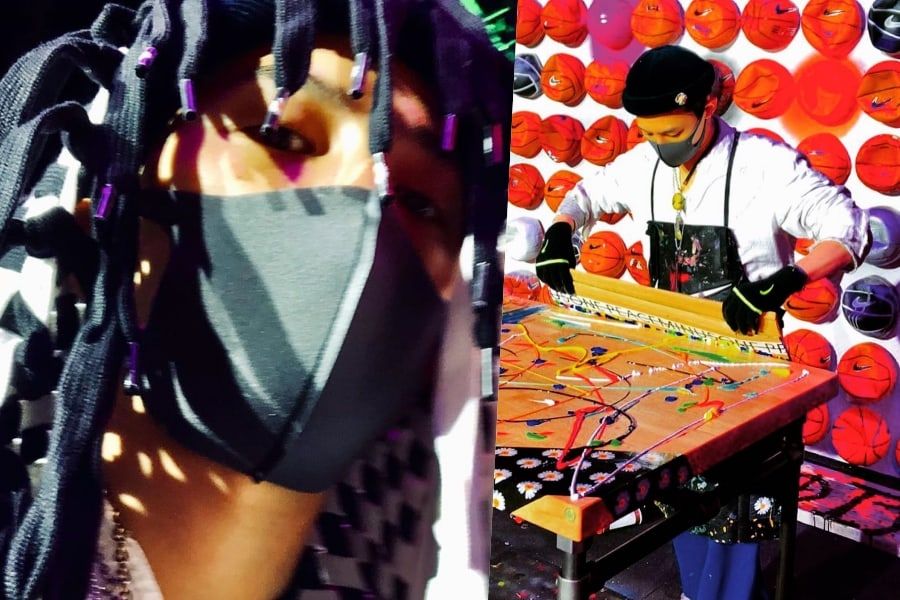 After being discharged from the military last month, BIGBANG’s leader has returned to his activities!

On November 23 at 7 p.m. KST, G-Dragon officially kicked off his post-military activities by making a personal appearance at a private fashion event in Seoul, where he participated in a “Live Art Performance” with sports brand Nike.

G-Dragon’s fashion brand PEACEMINUSONE recently collaborated with Nike to recreate their iconic Air Force 1 sneakers into a new design called Air Force 1 PARA-NOISE (AF1 PARA-NOISE). The event in Seoul celebrated the release of these limited-edition sneakers, with invitations handed out through a lottery to only 800 lucky individuals.

The new sneakers garnered immense popularity immediately after their release, but only 818 pairs were initially made available to winners of the “Shock Draw” raffle. This led to long lines at the Nike store in Hongdae, Seoul, and online resales spiked to prices of nearly 10 million won (approximately $8,600).

G-Dragon showed up to the event in a black suit paired with sneakers, shyly introducing himself by saying, “I’m G-Dragon. I’m still not used to this, but I’m happy to see you all.”

As the event was held at the Peace Plaza in Seoul, G-Dragon drew attention to the daisy logo of PEACEMINUSONE. He explained, “Don’t daisies signify peace? Thinking of the flower, I thought [this venue] would match well.”

When asked what has changed since he first entered the military, he answered, “I got older. I’m not sure. I don’t know yet exactly what’s changed.” G-Dragon continued, “I think the atmosphere for making artwork and doing collaborations like this has changed.”

Regarding his collaboration with Nike, the singer shared, “Working with them was comfortable because they understood my thoughts. I hope people just wear these shoes really casually.” He also emphasized Nike’s slogan “Just do it” by adding, “Just do it! No matter what happens, I think it’s good to try doing something, anything at all.”

With the powerful response to his new collaboration with Nike, G-Dragon has demonstrated his considerable influence and ability to impact the fashion scene. On top of receiving attention for the incredible popularity of his new sneakers and the frenzy over raffle tickets, his unique way of tying his shoes is also making waves.

Check out some of G-Dragon’s photos from the event below!