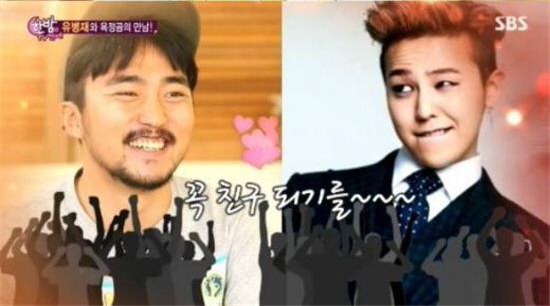 On the June 24 broadcast of SBS’ “One Night of TV Entertainment,” Yoo Byung Jae sat down with a reporter for an interview, during which he talked about joining YG Entertainment.

In the interview, the reporter asked him, “You’re the same age as G-Dragon. Do you think you’ll be able to become friends with him?”

Yoo Byung Jae responded, “Even though I’m young, I’ve come to realize that it’s not really important if you’re the same age in the real world. I don’t think I can become friends with [G-Dragon]. I won’t allow myself to. First of all, I think of him as a hyung. I think I’d be mad at myself [if I were to want to be friends with him],” causing laughter with his straight-faced expression while talking.

However, when given the chance to send a video message to the BIGBANG member, Yoo Byung Jae did a 180 and exclaimed, “Hey, Kwon Ji Yong! Let’s be friends!”

It seems that G-Dragon received the video message well, as he posted his response on his personal Instagram account on June 25: “Hey Yoo Byung Jae, you got it. Let’s grab a meal at the YG Cafeteria #YooByungJae #NewFriend.”