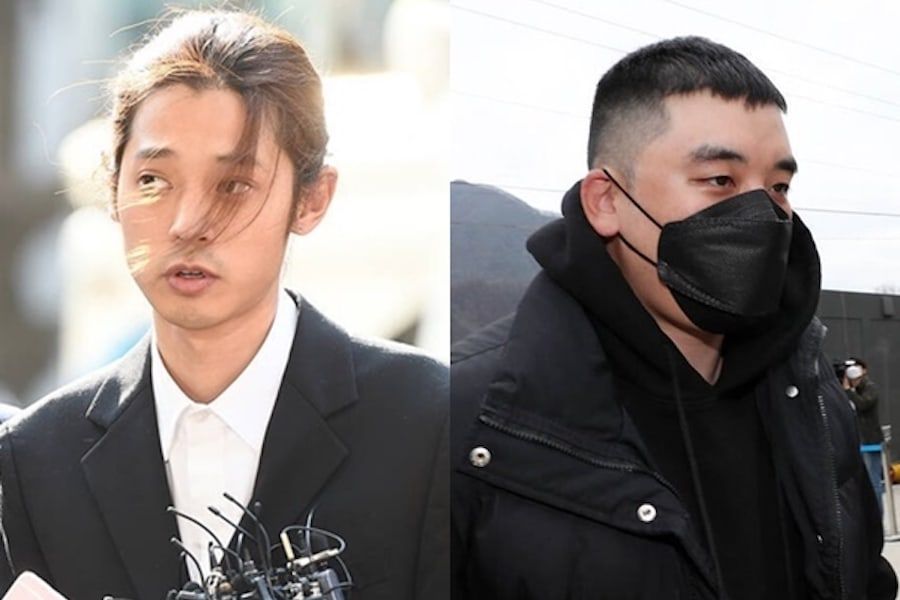 On February 26, the court heard witness testimonies and evaluated the presentation of evidence.

Regarding the charge of special violence instigation, the military prosecution stated that Seungri had been at a drinking establishment in Gangnam in December 2015 when he got into an argument with two customers (“A” and “B”) who had opened the door to his private room. Seungri mentioned the incident in a group chat with Yoo In Suk, who sent over a gang member (“C”) he was acquainted with. C, who was also indicted, then threatened the two customers A and B in an alley behind the bar.

One of the pieces of evidence presented in the February 26 trial was CCTV footage. In the video, Seungri is talking with an actress in a private room at the drinking establishment when A comes in and speaks to them. B is also visible in the hallway outside the room talking to Seungri. Jung Joon Young, Choi Jong Hoon, and Yoo In Suk, who were members of the same group chat, also make appearances in the CCTV footage. According to the military prosecution, the car that appeared in the CCTV footage in the alley behind the bar belonged to gang members and Seungri could be seen talking to the people who got out of the car.

Seungri’s lawyer said, “This drinking establishment was one that Seungri went to often. He had a celebrity with him, so he asked for a private room. He was alone in the room with the actress when A, whom neither of them knew, suddenly opened the door and came in. A was drunk and kept giving inappropriate looks toward the actress in front of Seungri. Seungri was not happy with the situation, but he smiled and tried to calm A down. Even when B came in looking for a fight, he continued to speak nicely to them both. Eventually, feeling uncomfortable, he and the actress decided to leave.

“The person he contacted was not a gang member but someone who was in charge of providing security for celebrities. That person has been indicted, but not for special violence and instead for driving without a license. The person who has been charged for special violence instigation appears in the video, but Seungri has never spoken to that person in his life. I have been informed that that person has also said that he was called not by Seungri but by someone else.” The lawyer also denied that Seungri had contacted Yoo In Suk about the incident.

Also during the February 26 hearing, Jung Joon Young, who was part of the group chat, appeared as a witness. Jung Joon Young is currently serving a five-year prison sentence for aggravated rape. He was questioned for over an hour each by the military prosecution and Seungri’s lawyers. He testified that he first met Seungri at an awards show in Hong Kong, and that he had got to know Yoo In Suk through Seungri. He said that he had not been in contact with Seungri recently.

In response to most of the questions asked by both the prosecution and the defence, Jung Joon Young said that he did not remember because it had been a long time since the events had taken place. The prosecution asked if he had witnessed prostitution mediation and solicitation while attending parties with Seungri, Yoo In Suk, and other acquaintances, particularly Japanese acquaintances, during the Christmas season in 2015. Jung Joon Young showed that he was aware that prostitution had taken place when he testified, “I was aware that the woman in charge of an adult entertainment establishment, whom Seungri was acquainted with, was sending female prostitutes.” Jung Joon Young also indicated agreement when the prosecution asked if he had been aware that the rate for the prostitution had been over 1 million won (about $900).

Seungri’s lawyer asked how he knew that a “gift” mentioned in Yoo In Suk’s text message after a drinking party referred to a female prostitute. After a moment of hesitation, Jung Joon Young replied that he thought he had heard it from a KakaoTalk conversation with “Kim,” a merchandiser for Club Arena and a close friend of Jung Joon Young, but that he could not clearly remember the details.

About the charge of special violence instigation, Jung Joon Young testified, “I don’t remember clearly, but I believe that we had agreed to meet in advance for an end-of-the-year drinking party. I remember the victim (“A”) said that he was Seungri’s senior classmate at school and complained that he had not been given a private room while his junior classmate had. Seungri was not in a good mood and I think that he was angry. I think that was because the victim tried to grab Seungri by the collar. But I don’t know the exact details of what was going on.” Jung Joon Young added that he had heard sounds of cursing and shouting from the parking lot, but continued to say that he did not really know what happened.

Seungri’s lawyer emphasized that Jung Joon Young’s testimony could be inaccurate and asked the witness questions like, “Isn’t it possible that you do not remember all the things that took place in the group chat?” and “Isn’t it the case that you often skimmed past the messages in the group chat because you were busy with your life as a celebrity?” In response to the lawyer’s question, Jung Joon Young confirmed that Seungri, Yoo In Suk, and the other members of the group chat had spoken only about business in 2015, around the time that the Japanese investors had been invited to parties, and had not directly mentioned prostitution.

The court stated that more witnesses will be called and that at least 10 witnesses were scheduled to testify in April.