K-pop boy group BIGBANG delivered its goodbyes to fans during the last concert before the members’ military enlistment.

As reported earlier, this event was the members’ very last performance together as BIGBANG before their military enlistment.

Near the end of the concert, the members took some time to deliver their goodbye messages to fans, one by one.

Seungri first gave his goodbyes: “This tour, which seemed like it will never end, has come to a close today. I can’t believe we have to say goodbye after several more songs.”

Daesung went next: “This has become our last performance before military enlistment. I’m not sad. I just want to tell you guys thank you for gifting us all the great times and memories.”

G-Dragon, teared up after giving his goodbye: “Honestly, my mind is just blank right now. I’m not sure what to say exactly.. I don’t have anything special to say… I’m happy. It was happiness and all I can say is that I’m grateful.”

Lastly, Taeyang gave his goodbyes: “As you know, after this performances, we will not be able to meet you guys for a short or long time, depending on how you perceive it. The reality is sad but, in a way, we will meet again later with improved, new sides, and a lot of indescribable thoughts are running through my mind. The times we spent together will always be a big encouragement to us during our military duty. Thank you so much and I love you.” 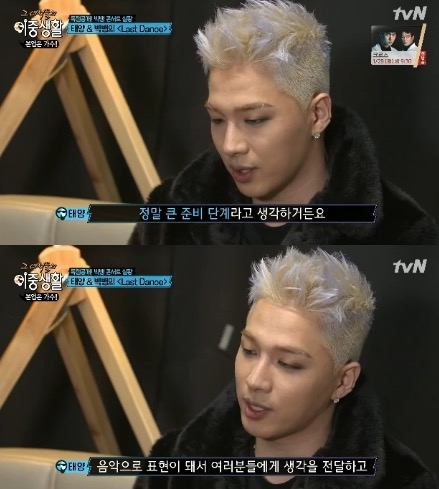 Taeyang, “The enlistment will the preparation for the second half of my life”

In the episode, the passionate scene of BIGBANG’s final concert before Taeyang’s and G-Dragon’s enlistments was shown. Sandara Park, who had attended the concert that day, confessed to the show’s panel, “I was watching from the audience and I cried, since I’ve been going to BIGBANG’s concerts for ten years now.”

Taeyang also talked about the concert and his mandatory military service.

When asked if it feels real that this was his last concert before going into the army, Taeyang admitted, “I still feel like I’m going to prepare and release something next year. I strongly wonder, ‘I’ll be able to do this life forever, right? It will continue, won’t it?’ It doesn’t feel real at all.”

Pertaining to his military service, Taeyang said, “[My enlistment] will be the preparation stage for the second half of my life. I’m going to prepare very well and fulfill my service well in order to grow as a better man and person. I’ll express that through music and convey it to everyone. This way, I will become a mature person who continues to grow.”

This news is a summary available on BIGBANGupdates (BBU)