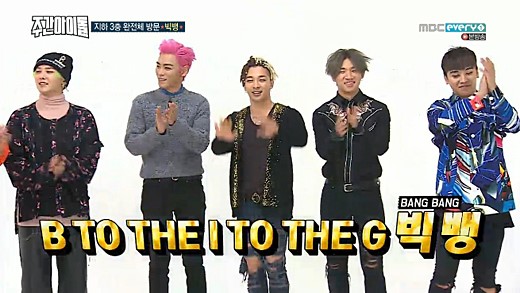 [마이데일리=이승록 기자] BIGBANG appeared on Weekly Idol and showed all they got.

BIGBANG made an appearance on MBC every1’s Weekly Idol that aired on January 4.

The hosts introduced them saying, “The legendary idol group is here”. BIGBANG members appeared on the set one by one on the red carpet riding in a mini car. They competed with each other to make a funnier appearance.

The members said hi in a way that they used to when they were rookies and explained that it is supposed to describe the BIGBANG. They said that they are a big fan of Weekly Idol and TAEYANG made everyone burst into laughter by confusing MBC every1 as a cable channel.

The emcees prepared a present for BIGBANG to congratulate them on their 10th anniversary. Members did not expect much and said, “What is this? It doesn’t look like something expensive” and “It’s really light.” Just like what they expected, it was a travel pillow and SEUNGRI made a joke and said, “Is this a toilet seat?”

Upon the emcees’ request, BIGBANG members took turns and introduced themselves as they did during their early days and seemed to find it embarrassing.

G-DRAGON played the apple game with Jeong Hyeong-don like the last time he appeared on the show four years ago. T.O.P and SEUNGRI, who are known to be not close with each other, also played the game and succeeded in rolling the apple. BIGBANG members failed jumping the rope as a group repeatedly and this made them even more competitive.

The members also did the random play dance. TAEYANG was worried and said, “We do a lot of tours, but the more we do tours, we stop practicing the choreography.” DAESUNG said, “If we dance like we do at concerts, we can even dance 32 times faster.”

Their songs were played, including “FXXK IT”, “LAST DANCE”, “BLUE”, and “LOSER”, but G-DRAGON said, “I’ve never done this before.” The emcees joked about their poor dancing and said, “Are you Heo Kyung-hwan?” and made everyone burst into laughter.

Meanwhile, the second part of Weekly Idol’s BIGBANG special will air on January 11.