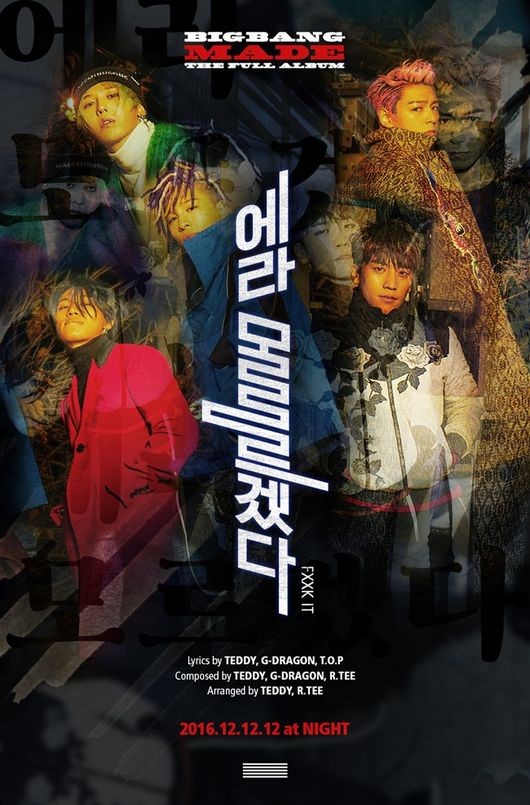 [OSEN=선미경 기자] Group BIGBANG is coming back with a new full album.

Finally, it is the D-day for BIGBANG’s comeback. BIGBANG releases their first full album in eight years on December 12 at midnight (December 13 at 0AM). The album is the end of “MADE” series that began last year, as well as the grand finale of BIGBANG’s 10th anniversary project. Music fans are paying keen attention of what new records BIGBANG will set with their comeback.

The album is BIGBANG’s first full album in eight years since “REMEMBER”, the second full album released in 2008, so fans have bigger-than-ever anticipation for it. The album includes the songs of “MADE” series and three new songs. It is like a gift pack full of songs of the flagship BIGBANG style, which is always worthwhile to listen to.

The new full album of BIGBANG has double title tracks. As all the songs in the album are expected to be of high quality, music fans are expressing great anticipation. “FXXX IT”, the first title track of the album, was jointly produced by G-DRAGON and YG Entertainment’s main producer TEDDY. G-DRAGON, T.O.P, and TEDDY took part in writing the lyrics of the song. R.Tee of TEDDY’s label “THE BLACK LABEL” also participated in writing the song. It is a hip-hop song with a groovy medium tempo, which well-displays BIGBANG’s unique appeals.

“LAST DANCE”, the other title track, is a R8B slow music which is a slow song that may represent BIGBANG. It is expected to reveal BIGBANG’s appeals with a feel totally different from that of “FXXX IT”. G-DRAGON, T.O.P, and TAEYANG wrote the lyrics of the song and G-DRAGON and Jeon Yong-joon wrote the melody. 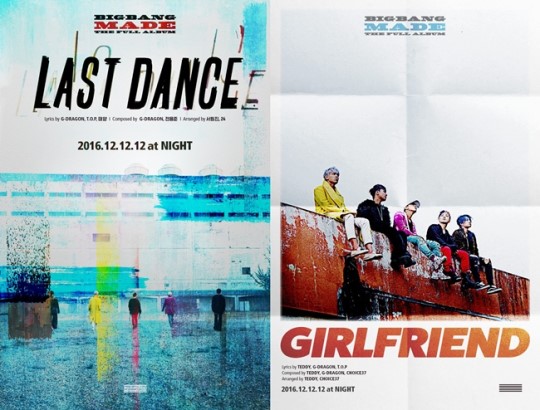 “GIRLFRIEND”, the last new song of BIGBANG’s new album, has a mood different from the double title tracks. The lyrics of the song were written by GD, T.O.P, and TEDDY and its melody was written by GD, TEDDY, and CHOICE 37.

Even though nobody knows what the new songs are like yet, music fans are paying keen attention to BIGBANG’s new album, as they have firm trust in the quality of BIGBANG’s music. The new album is all the more meaningful, as it is an unprecedentedly grandiose finale of BIGBANG’s 10th anniversary project and as it will be hard to complete team of BIGBANG for some time because T.O.P joins the police for his mandatory military service in next February.

Before the release of the album, BIGBANG will host “Countdown Live” broadcasting on search engine NAVER’s V-APP from 11PM on December 12. The music videos of two new songs will be unveiled before the album’s release, in the broadcasting. Music fans and insiders are paying keen attention to how big impact BIGBANG’s power will give to the music scene.