[OFFICIAL ANNOUNCEMENT] YG YANG HYUN SUK, “No Spoilers on SEUNGRI’s MV for ‘1, 2, 3!’, Due to Filming Concept” 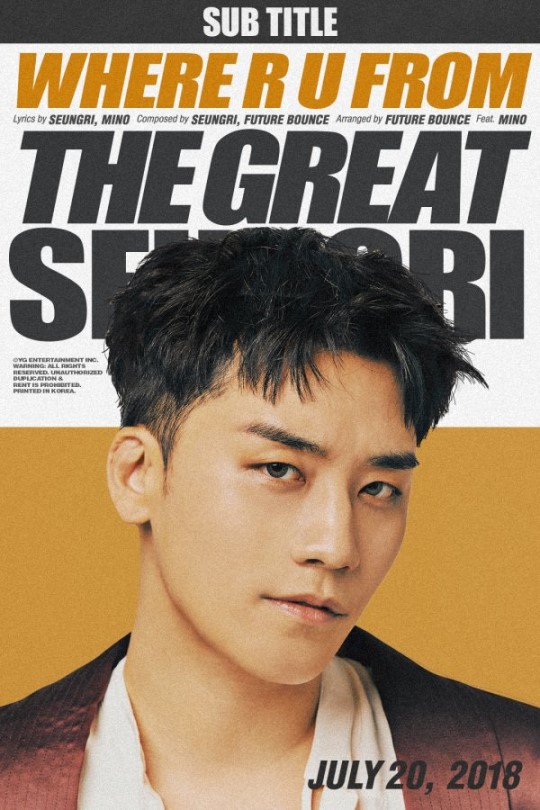 On July 12, YANG HYUN SUK wrote, “Please understand that teasers and spoilers on the MV for the title song ‘1, 2, 3!’ from SEUNGRI’s first solo album ‘THE GREAT SEUNGRI’ cannot be revealed due to the filming concept of the video”, through his social media account.

He added, “We’ll repay with quality without regret”.

Artists usually reveal spoilers and teaser videos before releasing new songs, as a promotional strategy to raise anticipation. However, SEUNGRI decided to keep his video secret, raising even higher curiosity. People are also wondering about the filming concept, which YANG HYUN SUK mentioned as the reason spoilers cannot be revealed.

The song ‘1, 2, 3!’ is a song filled with sensuous metaphors, which blend well with SEUNGRI’s character. The listeners will be able to take a glimpse at SEUNGRI’s upgraded musicality through the track. 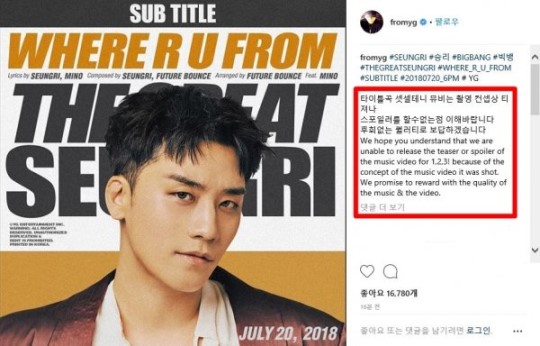 The song was written and composed by YG’s hitmaker TEDDY. SEUNGRI also displayed his passion on his first solo album by participating in the writing and composing of the song. 24 and Seo Wonjin were credited for the composition and arrangement of the track. It will be the first collaborative work between SEUNGRI and TEDDY, so people are wondering what kind of market impact the song will bring to the K-Pop scene.

SEUNGRI’s first solo album, ‘THE GREAT SEUNGRI’, which will be released on the 20th is filled with a total of 9 tracks. SEUNGRI finished preparing to display his broad musical spectrum by participating in the writing and composing of 8 tracks from the album. After making comeback, SEUNGRI will hold his first-ever solo concert ‘SEUNGRI 2018 1st SOLO TOUR [THE GREAT SEUNGRI] in SEOUL x BC CARD’ from August 4~5 at 6 PM in Jangchung Gymnasium, Seoul, and meet his fans.