[OFFICIAL] BIGBANG’s New Single ‘FLOWER ROAD’ to be Released on the 13th… Composed By GD·Written By T.O.P “Made With Enlistment in Mind” 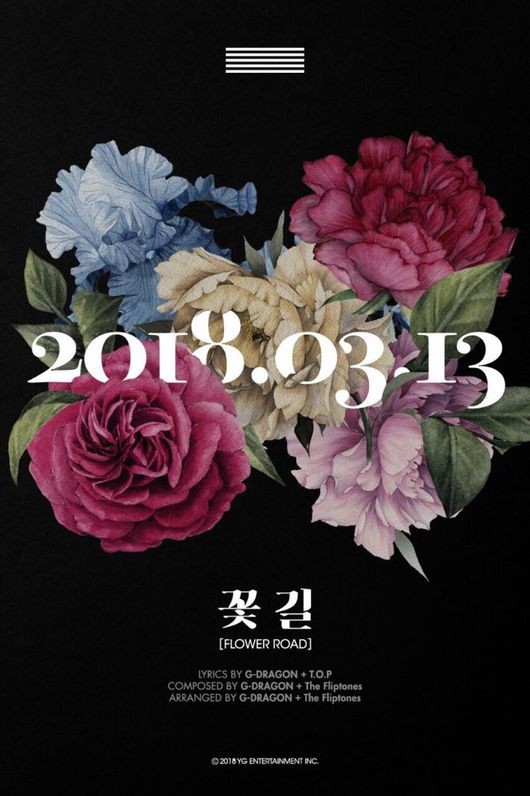 Today (10th), YG Entertainment revealed the fact that the title of BIGBANG’s upcoming single which will be released on the 13th is ‘FLOWER ROAD’, on their official blog. The multi-colored flowers in harmony with each other on the teaser poster with the song’s title captures the viewers’ attention. The lyrics written by leader G-DRAGON and oldest member T.O.P adds ardent emotions to the song. BIGBANG’s feelings toward the fans while facing farewell due to enlistment are engraved into the lyrics.

The song ‘FLOWER ROAD’ is receiving high attention since it will be a song by BIGBANG to be released in a year and 3 months. Furthermore, since all 5 members were featured in the song, the surprise release will be fruitful showers for the fans in and out of Korea, who will miss BIGBANG while the group is on break while the members serve military duty.

Following BIGBANG’s oldest member T.O.P, G-DRAGON enlisted in the ‘White Skull’ Division located in Cheorwon, Gangwon-do on February 27. TAEYANG will enlist in the ‘Blue Star’ 6th Division Recruit Training Center located in Cheorwon, Gangwon-do on the upcoming 12th, while DAESUNG will enter the ‘Ikija’ 27th Division Recruit Training Center on the 13th. The youngest member SEUNGRI is currently preparing for his solo album which will be released this year, as well as performing his scheduled activities in and out of Korea.