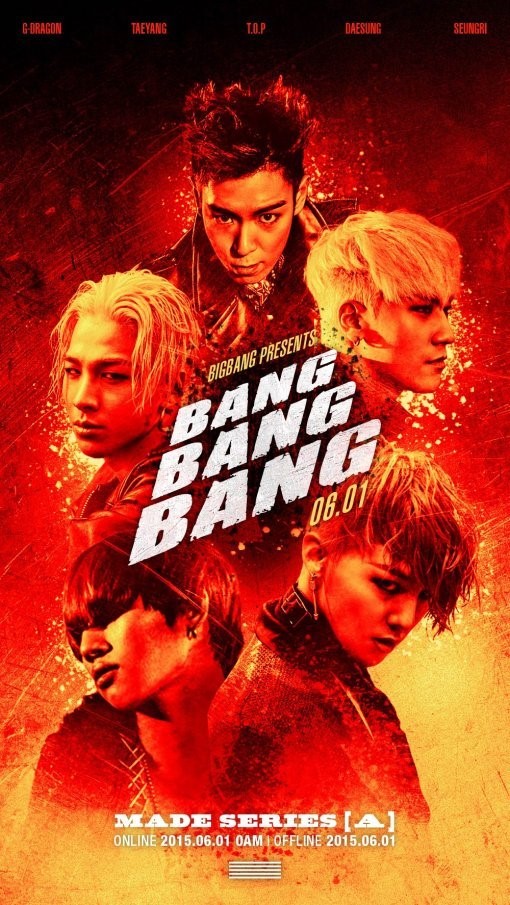 [OSEN=??? ??] “BIGBANG will be showcasing the most powerful music you have ever heard before.”

Such announcement from YG is building curiosity for the fans. This was a comment related to the upcoming tracks of BIGABANG titled “BANG BANG BANG.”

The second album “A” of the MADE Series includes the new track “BANG BANG BANG.” On May 27 at 9am YG uploaded a poster on its blog with the caption that read ‘BIGBANG PRESENTS’, ‘BANG BANG BANG.”

BIGBANG’s upcoming track is known for being an extension of “FANTASTIC BABY” and “LIES.” Personnel who saw the sneak peek of the song commented, “This is a very fancy main-dish this time. You can’t stay still. It’s that dynamic. The new track reminds you of ‘FANTASTIC BABY’ or ‘LIES’ or ‘LAST FAREWELL.’ It’s even faster and more powerful than ‘FANTASTIC BABY.’”

If “LOSER” and “BAE BAE” in May touched your sentiments, than “BANG BANG BANG” in June will leave you mesmerized with the dynamic beat. BIGBANG have already shaken the music world with the first project “M.” It will be interesting to see what they have got for us this time.

Paris Goble is involved in the choreography of “BANG BANG BANG.” She also appears in the music video, which is already attracting much attention from the East and the West continents. YG personnel said that YG’s Executive Director did not hold back in escorting Paris Goble and globalizing the agency’s representing idol group that rose to international stardom.

Paris Goble was involved in TAEYANG’s “RINGA L:INGA” and GD X TAEYANG’s “GOOD BOY.” She is now one of the most successful choreographers whose schedule is absolutely full.

The visual effect of the music video is also arousing much attention. BIGBANG’s new video is directed by Seo Hyeon Seung who directed “FANTASTIC BABY.” The video hit 150 million views on YouTube recently, breaking the record for BIGBANG’s videos.

With the new album coming up in just 5 days, BIGBANG’s popularity is only rising. Since their return with the two tracks, they swept across all music charts and occupied the top two slots on Billboard’s World Digital Songs. They took the top position for 3 weeks in a row, and despite other artists releasing new tracks, they are maintaining their place for 27 days in a row.

With the impact of the “M” still in the air, in just 5 days the second series “A” will be unveiled. They have made May the “Month of BIGBANG”, and all eyes are on the quintet to see what they will show us this time on June 1.