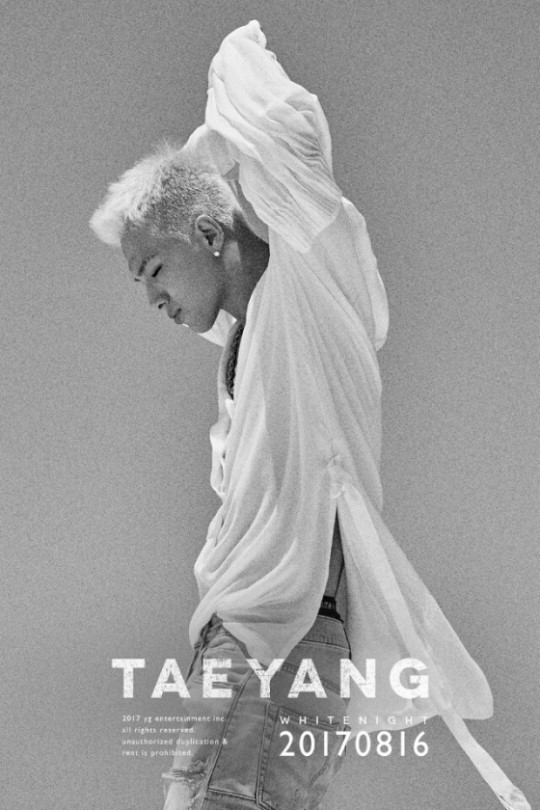 TAEYANG’s label YG Entertainment (“YG”) unveiled a poster of TAEYANG’s solo comeback, on the company’s official blog, on August 7 in the morning.

According to the poster, the date of TAEYANG’s new solo album will be released on the 16 this month. The title of the album is “WHITE NIGHT”.

Notably, TAEYANG’s new solo album will be a full album, not a single album with only one song, so he is drawing all the more attention. It is TAEYANG’s first solo full album in three years and two months since his second full album “RISE” with title track “EYES, NOSE, LIPS” released in June, 2014.

TAEYANG has been fully concentrating on his new solo album since BIGBANG’s performances early this year. He recently hinted on his upcoming comeback by releasing news of his music video shooting overseas.

TAEYANG made official debut in 2006, as a member of BIGBANG. He was well-reviewed by critics and enjoyed great popularity from the public for title track “ONLY LOOK AT ME” of his first solo album “HOT” released in 2008. Then, TAEYANG released first solo full album “SOLAR” in 2010 and drew global popularity with title track “I NEED A GIRL”.

TAEYANG boasted his potential as a solo artist by sweeping grand prizes and main prizes for “EYES, NOSE, and LIPS”, the title track of his second full album released in 2014.

Those are the reason why TAEYANG’s new full album is drawing all the more attention.

In the meantime, TAEYANG has recently been successfully hosting his second solo world concert tour. He will host solo concert on August 26 and 27 at Jamsil Gymnasium in Seoul.