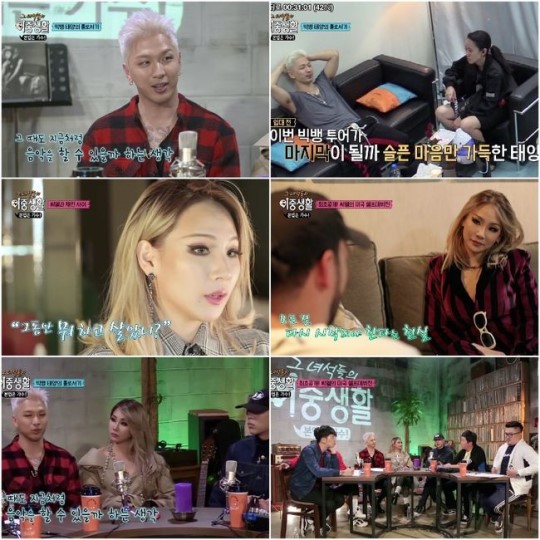 [OSEN=김은애 기자] tvN’s new music observation variety ‘Day Job’s a Singer – Livin’ The Double Life (Abbreviated as ‘Double Life’)’ was unrevealed, and displayed the double-lives of top musicians no one ever saw from other programs, different from the glamorous appearances shown on stage.

On the first episode of tvN’s ‘Double Life’ which aired on November 23 10:50 PM KST, back stage off the record of top 1% musicians including TAEYANG, CL, and OH HYUK and their daily lives were revealed, gathering attention. The show had an average viewer rating of 1.5%, and a highest moment rating of 1.9% based on paid-platform households. (Nielson Korea)

CL revealed her unsupported struggles in her life in the States. As she never revealed her private life through a reality program and since people were wondering what she was up to after the break-up of her group, every scene was new and special. Her life in the States was not glamorous as people expected. In fact, it was the opposite. As she abandoned her success in Korea and started as a rookie to become an Asian Pop-star, she had to go through busy schedules, touching the viewer’s hearts.

She also revealed her innermost feelings about the break-up of her previous group. She started out by stating, “I can only tell you my personal stories”. She continued, “It was regrettable. It was hard. I wanted to be together until the end. I wanted to take responsibility”, and eventually burst out in tears. Even during Chuseok holidays, she had to comfort her loneliness through video calls with family and had to burn incense in her house after a performance, to overcome tinnitus and her anxiety symptoms, arousing empathy.

TAEYANG showed how he’s doing on the solo tour. He stated, “If someone asks me what’s the most happiest thing in the world, I would say it’s eating delicious food. There are so many delicious foods in the world”. However, he kept his empty stomach before the concert to perform at his best, displaying professionalism and great self-management.

Besides ‘TAEYANG’, the glamorous top musician on stage, ‘Dong Youngbae’s daily life was also revealed. He said things people couldn’t understand in front of food or got hyped all the time and started dancing, showing his playful side. When he was alone, he stood still due to his tiredness, which was both funny and pitiful for the viewers.

He also displayed his agony as a 12th year musician. He expressed his longing for his members and said, “always miss them”, touching the viewers. On the meeting for the year-end concert ‘LAST DANCE’, he stated “It could really be the last (like the title). That’s why it’s sad”, making the viewers pitiful.

Meanwhile, OH HYUK, who presented Korea’s first ‘Mute Variety’, showed his life as a global band touring in 28 countries including the United States, Canada, and Europe. Jung Hyungdon who once had a project band with them stated, “The most boring band as far as I know”, but then stated, “They are flawless as musicians though”, building up anticipation for an unexpected charm.

Even CL who first felt interest in OH HYUK’s silence started getting frustrated. Eventually she exploded, saying “You really make me frustrated”, shaking head. Defconn sighed and said, “I feel pity for the producer”, making the viewers burst into laughter.

Web users that watched the first episode of ‘Double Life’ stated, ‘It’s sad that TAEYANG is worried about BIGBANG’s last. I hope they make good songs for a long time”, “2NE1’s breakup is really regrettable. CL struggling trying to achieve her dreams made me feel sad. I hope she makes it”, and “OH HYUK has an attractive character and I don’t even need to say this. I’m excited for next week’s episode”, supporting the three musicians.

‘Double Life’ is a music observation variety program which reveals TAEYANG, CL, and OH HYUK’s lives in and out of stage as top 1% musicians. The show airs every Thursday night at 10:50 KST.