Sing a Song for PyeongChang 2018
The soprano JO Su-mi, whom the conductor Herbert von Karajan called “voice from above,” and K-pop artist Taeyang, who has many fans both in Korea and abroad, and is popular for his groovy dancing and singing, have become the latest honourable ambassadors for PyeongChang 2018. Although they are representative figures in different arenas of music—one in classic while the other in pop—they both said that sports and music are universal languages. 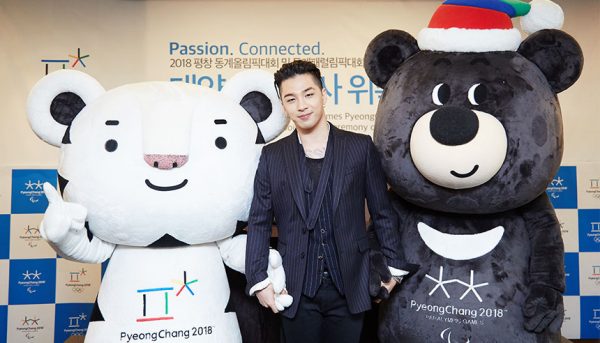 Snow, Music, and Sun (Taeyang)
Taeyang, a popular K-pop artist, was born in 1988, the year when the Olympic Games was held in Seoul. Babies born in that year are often called “Olympic kids,” and he is one of them. To be an honourable ambassador for PyeongChang 2018, which is 30 years from the Seoul Olympic Games, is special for him.

Congratulations on your being named as an honourable ambassador for PyeongChang 2018. You looked incredibly happy when you received the nameplate.
TAEYANG: This is the first nameplate I have ever had with my own name. I am so thrilled (laughs). From now on, I am going to give one to anyone I come across and call for their interest in PyeongChang 2018.

You were born in 1988 when the Olympic Games was held in Seoul, weren’t you? What does being an honourable ambassador mean to you?
TAEYANG: I am so excited to be a part of something that makes my heart go wild. I know how hard athletes have to train and fight to beat themselves. In addition, the Olympic Games is at the pinnacle of their career. I am truly honoured to be there with them, most especially because PyeongChang 2018 aims to become a cultural event. A song to promote the Olympic Games will be released on November. Have high hopes for the new song!

Do you have a favourite winter sport or athlete that you cheer for?
TAEYANG: I love watching short track speed skating and figure staking. The most recent figure staking event I watched was that in which Cha Jun-hwan played. I was impressed with how he kept his calm throughout the game despite his young age. I wish the aspiring young figure skater flourishes at PyeongChang 2018. I learned about curling from a TV show and found it interesting as the players in a team moved as one. I hope I could grab an opportunity to learn the game. Curling is also one of the Paralympic events, so I hope that more people would be interested in it.

Performing artists and athletes have something in common in that they work hard for a long time to stand on a stage
TAEYANG: Yes. I believe music and sports can go beyond borders. When I perform for foreign fans, they often sing with me in Korean lyrics. It is such a wonderful feeling. I feel as if I am doing something very important. I think playing sports is not very different. When I watch the athletes play as hard as they can, I come to think of me immersed in singing in front of the audience, regardless of how many they are or how well they respond to me. I will always think of myself as one the athletes whenever I stand before an international audience.