Beginning from Japan stadium concert in July this year, TAEYANG travelled the globe to give concerts in the United States, Canada, etc. With the successful finish of the last show of his tour which was held in Taiwan on October 29, TAEYANG’s four-month-long world tour has been rounded off.

TAEYANG poured out all his remaining energy at the last show held at “LINKOW STADIUM” in Taipei, Taiwan. Notably, the heat of the concert reached its climax when SEUNGRI made a surprise appearance on the stage as a guest artist. SEUNGRI and TAEYANG sang “BANG BANG BANG”, “FANTASTIC BABY”, and “EYES, NOSE, LIPS” together, to give captivating encore performances.

Even after the end of the show, the audience did not leave the stadium and shouted out TAEYANG’s name for 10 minutes. TAEYANG came upon the stage once again in response to fans’ great support and marked the grand finale of his tour by passionately singing “EYES, NOSE, LIPS” one more time. 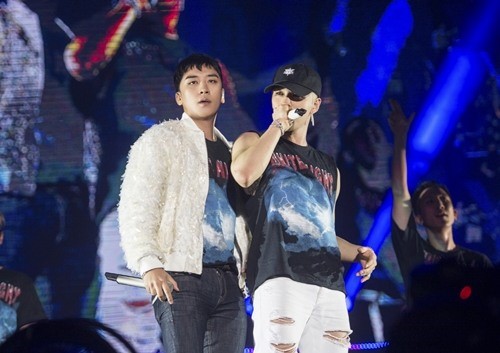 TAEYANG’s “WHITE NIGHT” tour proved the true value of solo artist TAEYANG. TAEYANG who kicked off his world tour right after releasing his first solo album in three years presented the live performances of all the songs in this new album on the stage of his tour, to boast his veteran singing abilities.

TAEYANG’s world tour was all the more meaningful, as shows were held in North America for the first time. All the tickets for the Vancouver show were sold out upon the opening of the sale, to prove Canadian music fans’ keen interest in TAEYANG. American Billboard extolled TAEYANG by saying, “TAEYANG boasts unrivalled charisma on the stage”. As such, TAEYANG has proven his global popularity once again by standing under the spotlight of foreign music fans and media outlets.

After the successful finish of his world tour, TAEYANG will continue with his performances in Korea. TAEYANG will appear in JTBC’s “MIXNINE” show as a special member of its judge panel, to give warm words of advice based on his full know-how to contestants.

BIGBANG will hold concert on December 30 and 31 at Gocheok Dome in Seoul.