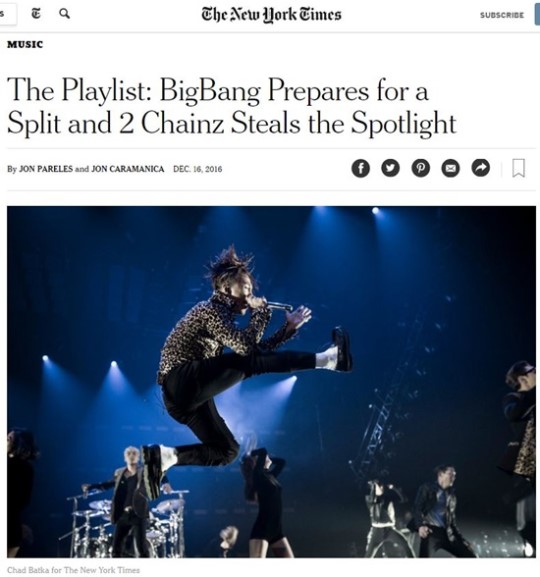 [엑스포츠뉴스=김미지 기자] The New York Times of the US found BIGBANG’s new single “FXXX IT” “intriguing”.

On December 16 (local time), The New York Times chose “FXXX IT”, one of the title tracks of BIGBANG’s third regular album “MADE THE FULL ALBUM”, as one of the most notable songs of this week.

Under the headline of “BigBang Prepares of a Split”, the magazine wrote, “T.O.P… is scheduled to begin his compulsory service in the South Korean military soon…In advance of the split, BigBang has released three new songs, completing the ‘Made’ album announced last year.”

It also wrote, “Of the three, ‘FXXX IT’…is the best, a slow thumper with strong singing by Daesung, tart rapping by T.O.P., all captured in a characteristically wacky, neon-bright video.”

Every week, The New Work Times announces The Playlist, the most notable songs and videos chosen by its pop critics. Earlier on, BIGBANG’s “MADE THE FULL ALBUM” has also been chosen as “Best of the Week” by Apple Music.

Demonstrating BIGBANG’s global popularity, the album continues to be on the no.1 spot on the iTunes albums chart in eleven countries even though it’s been five days since the album has been released.

Meanwhile, BIGBANG is to appear on MBC’s Infinite Challenge to celebrate the 10th anniversary of its debut. Also, the group will perform its new songs for the very first time on SBS’s Inkigayo on December 18.