The title track of TAEYANG’s new album is “Darling”… Reunited with TEDDY for the first time in three years since “EYES, NOSE, LIPS 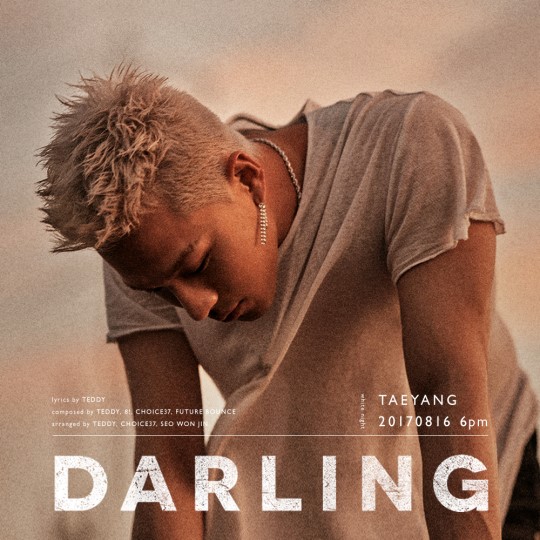 [엑스포츠뉴스=전원 기자] While BIGBANG’s TAEYANG is counting down for his upcoming comeback, the title of the new album’s title track has turned out to be “Darling”.

On August 10 in the morning, YG Entertainment unveiled a teaser poster of “Darling”, the title track of TAEYANG’s new album “WHITE NIGHT”. In the poster, TAEYANG is showing sad and serious facial expression as if he has just broken up with his lover, to arouse many people’s curiosity.

“Darling” is a song that highlights the sorrow of breakup. TAEYANG’s captivating vocal is expected to shine in this song once again. The lyrics and melody of the song were written by YG’s main producer TEDDY. 8!, CHOICE 37, FUTURE BOUNCE also took part in writing the melody as well.

TAEYANG and TEDDY have long-time connections. TEDDY has given birth to TAEYANG’s best hit songs including “ONLY LOOK AT ME”, “WHERE U AT”, “WEDDING DRESS”, and “EYES, NOSE, LIPS”. The synergy between the two has always been more than expected every time a new song was released. That is why many music fans are already paying keen attention to weather the two will live up to people’s expectations this time again.

The music video was shot all in LA and Alaska in the United States, to show the background of Mother Nature in accordance with the magnificent feel of the song. Music fans are paying keen attention to how TAEYANG’s story of breakup is expressed in the song.