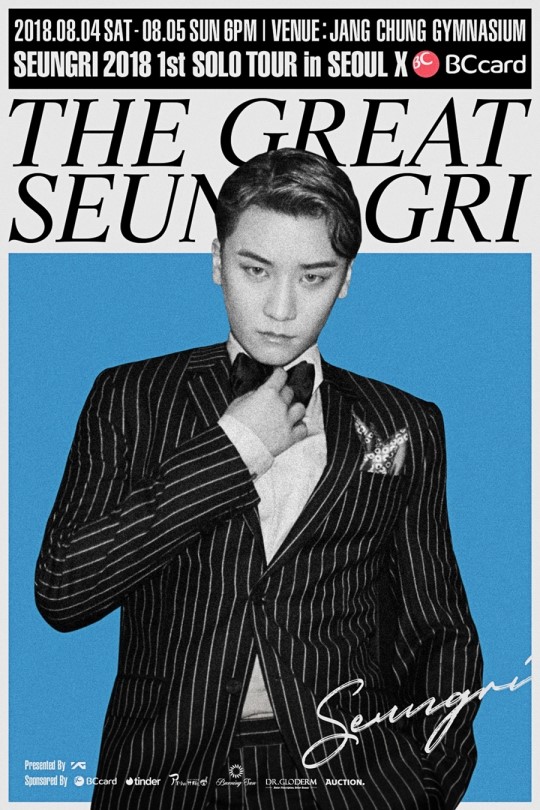 The regular ticket sales will open on the 21st (today) at 8 PM through Auction Ticket. Auction Ticket will run a surprise event, and select 1 buyer which SEUNGRI will deliver the ticket himself.

They also prepared a special event for customers that used over 200,000 KRW through online shopping using BC Card from July 2~22. 40 people selected from the event will earn the opportunity to watch SEUNGRI’s concert rehearsal and take photos with him.

SEUNGRI previously shared the news of himself preparing for the concert through the fan club zone, raising expectations on his first-ever solo concert being held for the first time in 12 years since he first made debut. He is expected to fill up the concert with fabulous performances and joyous talk corners.

The concert will display unique performances made up with live band and DJ performances. SEUNGRI is expected to present a pleasant concert that fits well with the summer, by managing the stage with performances that display SEUNGRI’s unique personality.

SEUNGRI stated, “I’ll make the summer even hotter”. He raised the expectations by fans by adding “I’ve prepared fantastic performances and talk corners filled with laughter bombs. Please come to the concert, enjoy, and party hard”.

Meanwhile, SEUNGRI is expected to make comeback on July with his first official solo album.