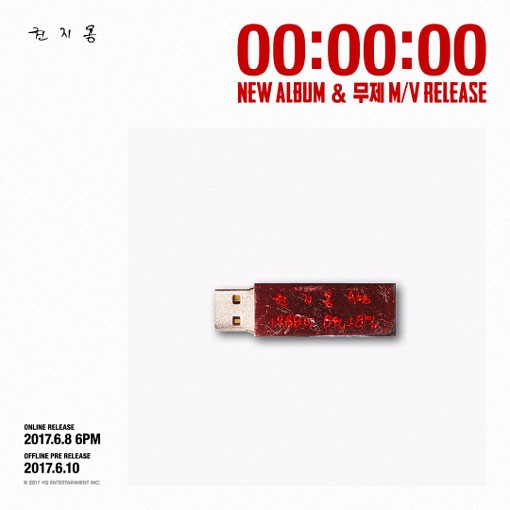 [스포츠 동아=김원겸 기자] Link to downloading website, KMCIA made a final decision that “it is not a record”, But “recognized as a record” and ranked on Hanteo Chart

While G-DRAGON’s new mini-album “KWON JI YONG” is to be released off-line on June 19 in the form of a USB memory stick alone, Korea Music Contents Industry Association (KMCIA) decided that it cannot be recognized as a record, to trigger a controversy. The KMCIA is running Korea’s official music chart Gaon which is sponsored by the Ministry of Culture, Sports, and Tourism.

The current copyright law of Korea defines a “record” as “a material object on which music is fixated”. As a USB memory stick can also play the role of storing medium for music just as LP, cassette tape, and CD do, the KMCIA had been originally intended to recognize it as an official type of record, starting from G-DRAGON’s USB album.

However, G-DRAGON’s USB leads to a specific website after starting, to make its users put in the serial number written on the case and download the music and videos. That is why the KMCIA decided not to recognize it as a record, seeing G-DRAGON’s USB album as a device for downloading music. The association sees it as something similar to “Kihno album”. “Kihno” is a new type of record produced to enable users to download music, videos, and photos by using an application on a smartphone or computer. The KMCIA is not recognizing it as an official type of record.

Therefore, “KWON JI YONG” will not be included in the album sales chart of Gaon. The decision of the KMCIA will also affect the rankings of TV music shows, as SBS “INKIGAYO” and MBC “Show! Music Center” give rankings to songs based on the record sales volume counted by Gaon Chart.

However, many also insist that G-DRAGON’s USB album does not have any problem with being recognized as a record, as purchasing it is no different from purchasing a record. They claim that recognizing only the conventional forms of record as the official type of record is not reasonable, as the environment of the music industry and storage media for music are rapidly charging recently. Indeed, another music-ranking website Hanteo Chart regards “KWON JI YONG” as a “record” and will include it in its rankings.

The KMCIA says greater problems will arise if G-DRAGON’s USB album is recognized as an official form of record. Then, a general USB memory stick with G-DRAGON’s songs downloaded in it or a USB memory stick in which songs extracted from CD are stored might need to be recognized as a record, according to the association. The KMCIA also worries that if those types of storage medium are recognized as a record, it might cause a problem of “hoarding” of records and subsequent distortion of rankings on charts.