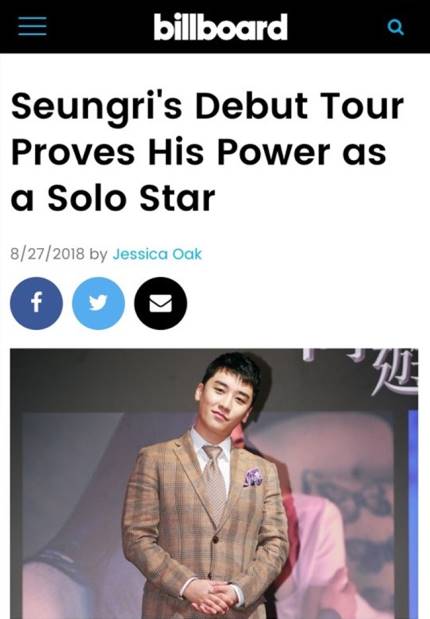 Billboard introduced, “BIGBANG’s youngest member SEUNGRI made his own path for 13 years since making debut”. He continued, “The ‘superstar’ became famous with his restaurant franchise and with his DJ label, but started to receive attention with his main job, music”.

They added, “SEUNGRI’s first solo nationwide tour which started in Jangchung Gymnasium, Seoul on the 4th was successfully wrapped up with his concerts in Daegu and Busan, while SEUNGRI revealed his various charms in front of thousands of fans with his powerful performances and creative directing”.

Billboard also showed expectations on his Japan tour by writing, “SEUNGRI’s concert in Japan starts on September 5 in Fukuoka. As the reactions on his first solo concert was heated, 2 additional concerts have been confirmed to be added on to his Japan tour”. They added, “The year 2018 can be a great year for the young star to get recognition as an artist”.