MC: 1) you're the leader of BIGBANG, new songs, new album, world tour. 2) you and the modern art.

MC: You like art?
GD: Yes, I'm interested. From when I was young, the drawings, fashion, MV, I have my own fantasy in art.

MC: Some criticizes about the exhibition. Saying the art is used in the commercial idol industry.
GD: Those criticisms are always at the beginning but I'm confident it'll get better as time goes. I feel good to be the beginning of the good result at the end, beginning of this controversy. The controversies, just like doing music, it has some good affects as well. So more people will show interests and stuff.

after talking about the exhibition*

MC: Now, Shall we talk about BIGBANG? feel a bit easier?
GD: Yes I do. *smiles

MC: if you release the full album at the end after releasing all singles, don't you think it'll lose its energy?
GD: I had a confidence with every music. And we thought this is the way to be with our fans and the public for a long time.

MC: You think people will still like the full album after releasing all singles?
GD: Yes, I'm confident.
MC: And the reason?
GD: I don't have any reason, but I'm confident.

MC: What's difference between BIGBANG and the other groups, EXO or SHINee?
GD: BIGBANG makes our own music and we appeal to the public, the public like us.

MC: Don't you think the other groups fans will be mad at this statement?
GD: Well, it's the truth. We make our own music.
(see full translation of this part below in the picture)

MC: Who is G-Dragon in 10 years?
GD: I tend to live my tomorrow better than today. Well I'm not even 30 yet, 28 this year. And I'm always thinking about what I'll do after 5, 10 yrs.
Maybe that's because I don't stop working with other artists, like this one the exhibition with artists of modern art.

MC: The time will come, when you'll not get awards, not be on the top of the charts. how would you feel?
GD: I think I'll be a bit sad when we don't make results because actually we're so used to receiving them. But these days the important thing is not the awards and charts, it's what difference we make. The changes, challenges.

MC: In last 3 years, weren't you worried about getting forgotten by the public?
GD: We've been doing so well as the group and as solo artists, so I haven't been that worried till now. but I'm always worried, thinking about the future.

MC: You once said you're harmful to the youth. What do you mean?
GD: I think I'm a bit of a.. should I say, mutant? and I think that attracts people. As I was inspired and learned from my senior musician colleagues, I want to become someone whom people can learn, imitate from.

MC: When will you go to the military?
GD: I go when it is time for me to go.

MC: I hope you don't lose your feels and talents even after you finish your duty.
GD: That's my recent concern. I won't lose.

GD talking about what he thinks about the criticisms*
MC: You seem you've thought a lot about this.
GD: I think much... yes. 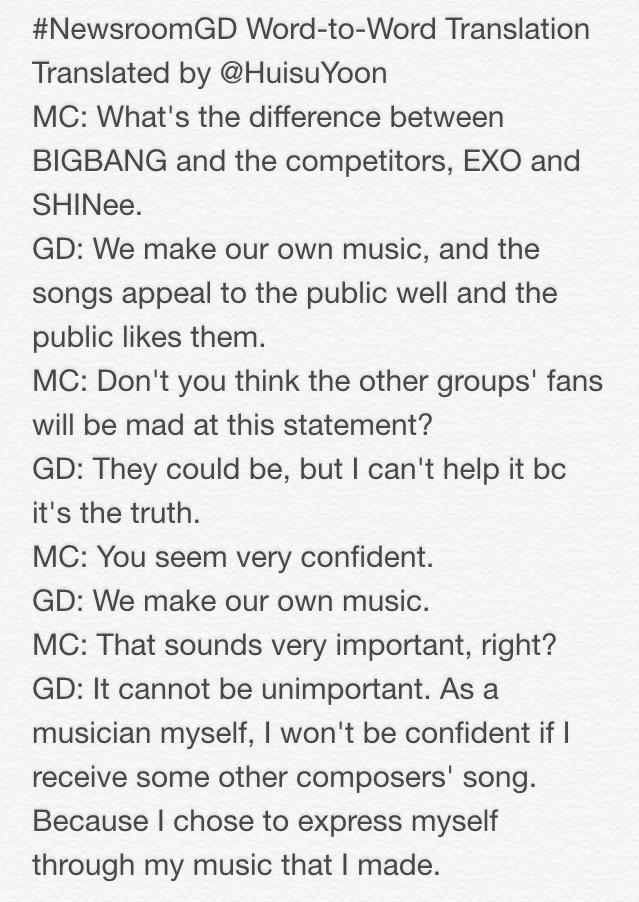 The interview included more details on the Exhibition and Artwork. We will post an English subbed version as soon as it becomes available. 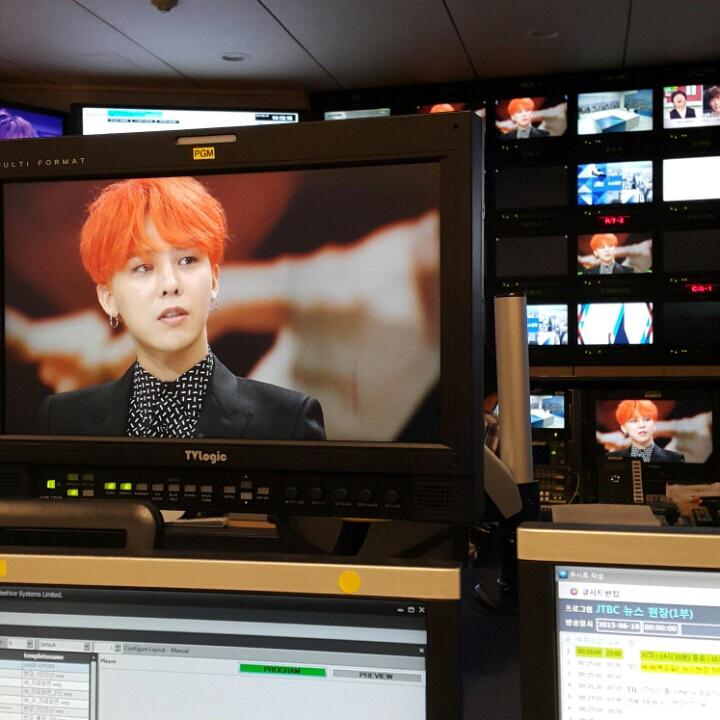 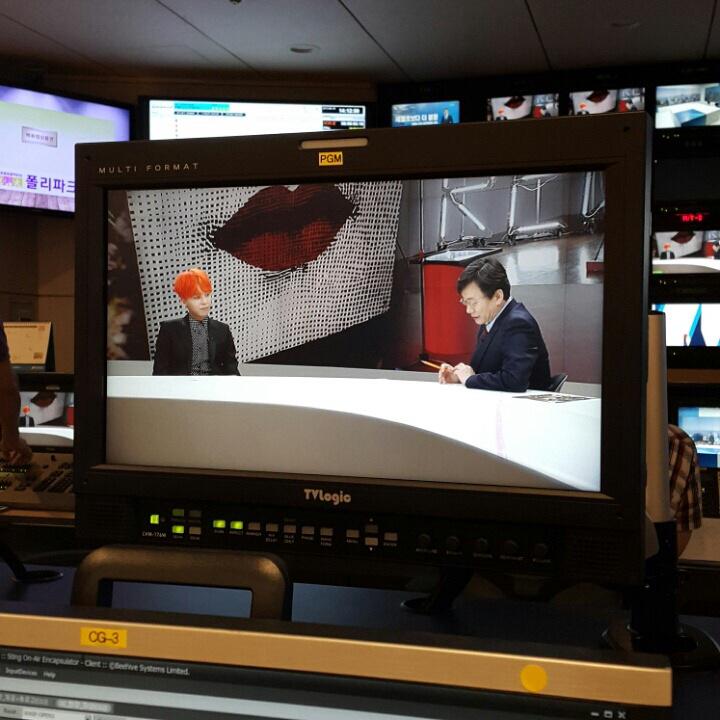 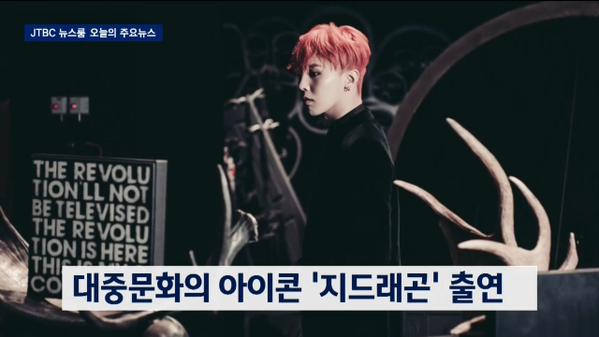 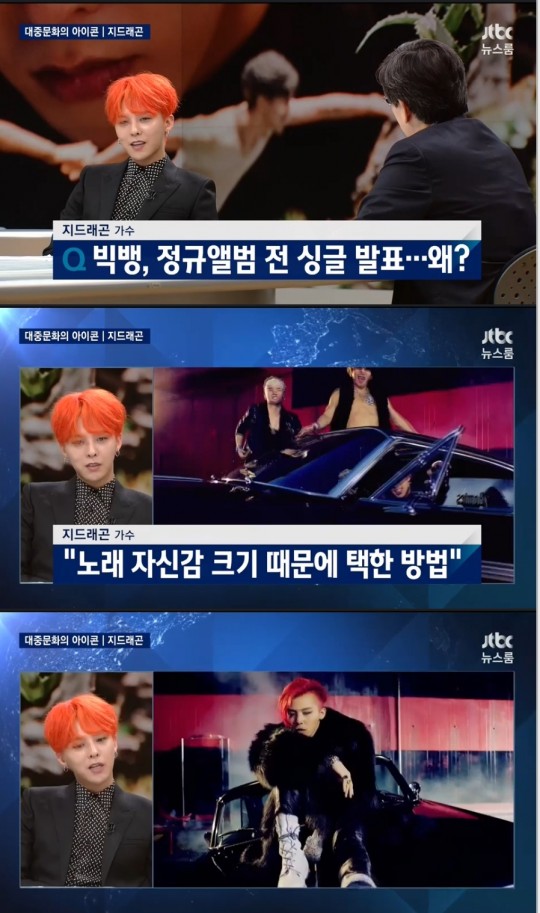