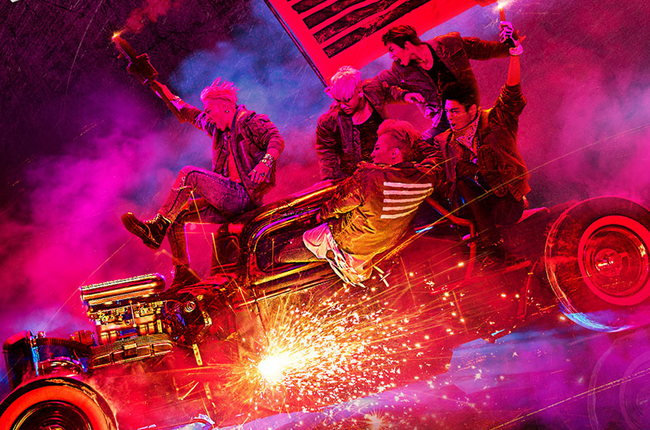 Making good on their promise to drop new music at the top of every month, BIGBANG revealed their latest creation, "Bang Bang Bang," with an out-there, potentially controversial music video.


"Bang Bang Bang" feels like a 2015 update of the band's 2012 EDM single "Fantastic Baby," which is the most-watched, non-PSY Korean video on YouTube. The new cut features bouncy, electro-pop production on the verses before it moves into a siren-like, trap-laden breakdown where G-Dragon sneers "bang bang bang!" After such an energetic verse, the trap section feels out of place and, due to the genre's time-change shift, screws with the song's stamina.

But "Bang" essentially stops at the 2:40 mark to revamp itself as a full-on party track with the trappy snares now replaced turbo-powered synths, as the guys lead a chanting, shouting chorus. It's a similar style to how "Fantastic Baby" ends, but now the vitality's been kicked up to a new level making this the perfect to track to end any concert with -- which was probably its initial mission.

Also like "Fantastic Baby" (not to mention "Bae Bae"), the new single's accompanying music video sees the band in a neon-flecked world where they guys rock everything from high-fashion (the band's leather coats are all on point) to unexpected accessories (TOP's bearskin hats, or Seungri's football pads) to looks that are boundary pushing (G-Dragon looks a bit like a new-age David Bowie when he's decked out in glitter and heavy eye-liner).


More or less every look is on point, with the the exception of a scene where we catch Seungri wearing a Native American war bonnet -- worn only by those who have earned the highest honors in their tribes. While this slip-up might have been excusable for a more localized Korean act, BIGBANG has toured around the world, has been exposed to multiple cultures and is part of YG Entertainment, a very globally minded record label. Someone should have caught that.