Coachella 2020 lineup is revealed officially. Rage Against the Machine, Travis Scott, and Frank Ocean are headlining the Calvin Harris, Run the Jewel, 21 Savage, Flume, Lana Del Ray, Lil Uzi, and more. But one of the most surprising and hypes names on the Coachella 2020 lineups is BigBang. Yes, this K-Pop boy group is going to perform this year at the musical festival.

So it is good news to BigBang fans because the k-pop group will have a big comeback this year. BigBang fans are very surprised and happy to lineup for Coachella 2020 because well the BigBang is in the lineup of performers. Their schedule of performance will be on April 10 and 17 and fans are ecstatic since it’s going to be their comeback. The K-Pop group has been on hiatus since 2017 when most of the members participated in the mandatory military enlistment.

Taeyang even posted the Coachella lineup poster on his official Instagram handle. While most of us are happy to “k-pop Kings” perform again but it is also going to be a bittersweet moment since the original group of five will now be only four.

Seungri already left the BigBang group and its agency after his alleged scandals. So, since the remaining members are G-Dragon, T.O.P, Taeyang, and Daesung. Let’s expect that it’s just four of them to perform from now on. It is sad to see that BIGBANG is no longer complete but right now fans are just so grateful that BigBang will still perform and make a comeback even with one fewer member.

There are so many controversies that were thrown at BIGBANG but no one can deny that they are one of the best k-pop performers out there. Coachella 2020 is a very big comeback since they will perform internationally. Last year Black Pink performed in Coachella too and it was very successful. So are you excited to see BigBang perform on stage again after over 2 years? Here’s the complete list of Coachella 2020 lineup revealed at its official twitter handle.

So this is the list of Coachella 2020 performers. Enjoy the music festival this summer. Coachella 2020 will place over two weekends i.e. April 10th-12th and April 17th-19th at Empire Polo Club, Indio, California 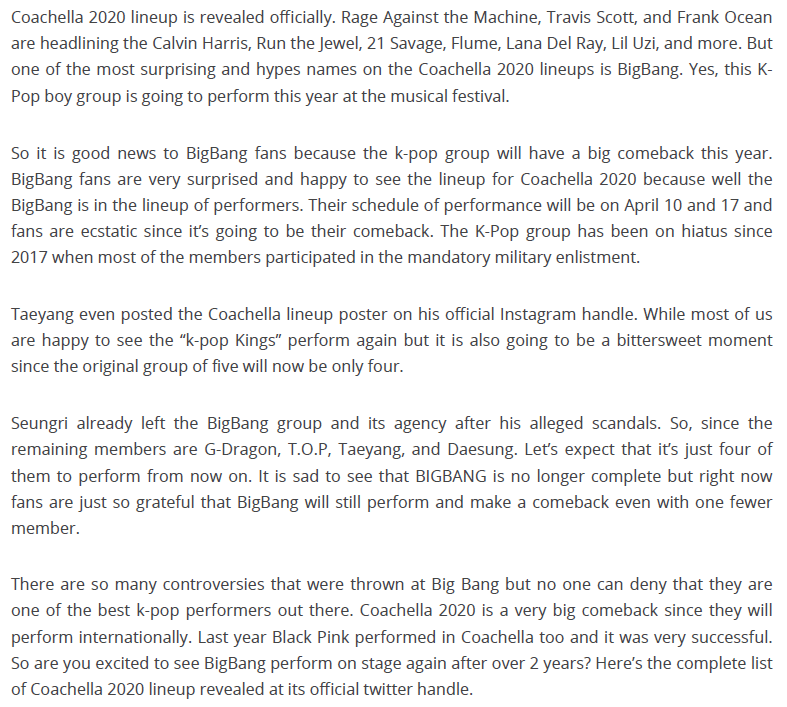