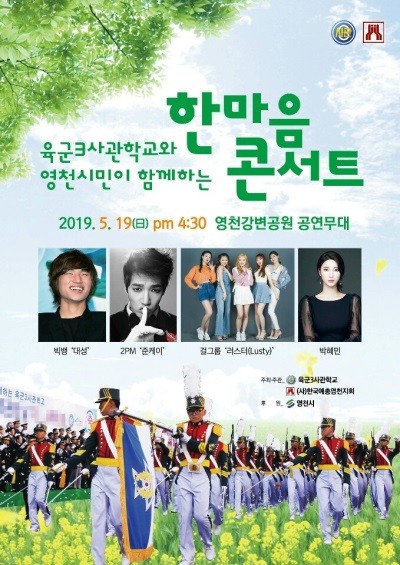 The "Hanmaeum Concert" with the Army's 3rd Academy and Yeongcheon citizens will be held at 4:30 p.m. on Wednesday at the outdoor concert hall of Yeongcheon River Park. (Provided in Yeongcheon)

The "Hanmaeum Concert" with the 3rd Military Academy and Yeongcheon citizens will be held at 4:30 p.m. on April 19 at the outdoor concert hall of Yeongcheon River Park.

The performance will be co-hosted by the Army's 3rd Academy and the Korea Yeolgyungcheon Branch.

The concert will start with a theftous demonstration performance by the honor guard of the second production company, followed by a performance by a military band.

Meanwhile, more than 1,000 cadets from the Army's 3rd Academy were given special outings in the Yeongcheon area on the same day, which is expected to boost the local economy as cadets' families and acquaintances are expected to join them and use local shops.