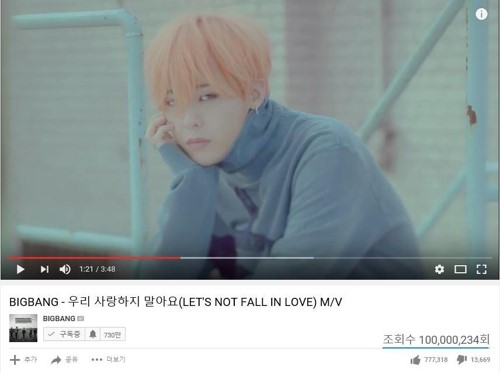 [연합뉴스=이은정 기자] The music video of group BIGBANG’s “LET’S NOT FALL IN LOVE” has surpassed 100 million views on YouTube.

According to BIGBANG’s label YG Entertainment on May 31, the music video of “LET’S NOT FALL IN LOVE” has become the seventh BIGBANG music video that surpassed 100 million views, following the videos of “FANTASTIC BABY”, “BANG BANG BANG”, “GOOD BOY” (GD&TAEYANG), “LOSER”, “CROOKED” (G-DRAGON), and “BAD BOY”.

BIGBANG is the first-ever Korean singer who has seven music videos that surpassed 100 million views.

“LET’S NOT FALL IN LOVE” is the title track of “E”, the fourth single album of BIGBANG’s “MADE SERIES” released from August, 2015. It is a song about sad love.