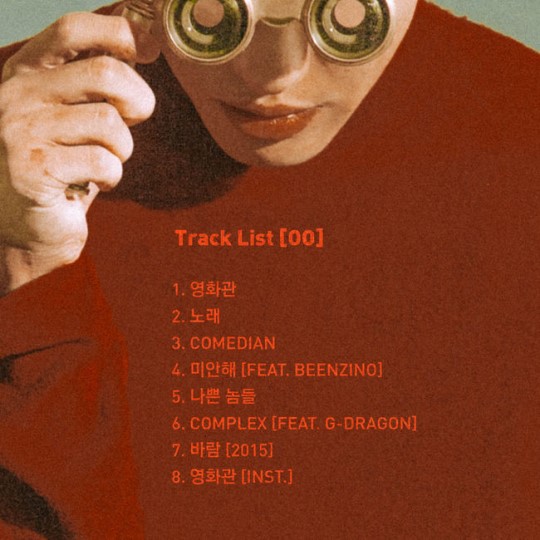 [OSEN=정준화 기자] The tracklist of ZION.T’s new album “OO” has been revealed, making his fans anticipate the album even more.

According to the tracklist that was revealed on February 25, the album consists of seven new songs–“Cinema”, “The Song”, “Comedian”, “Sorry”, “The Bad Guys”, “Complex”, and “Wishes”–and an instrumental version of “Cinema”.

ZION.T has a host of self-written hit songs such as “YANGWHA BRDG”, “NO MAKE UP”, “KNOCK”, and “MACHINE GUN”. He has participated in writing the music and the lyrics of all the songs in this album, making the album uniquely his.

The title track of the album has not been announced yet.

Peejay, KUSH, and Seo Won Jin, who has worked with ZION.T before and produced a host of hit songs, participated in making the album, raising the expectations.

BEENZINO and G-DRAGON feature on “Sorry” and “Complex”, respectively. BEENZINO worked with ZION.T for “She”, a song in ZION.T’s first album, and ZION.T featured on G-DRAGON’s “I LOVE IT”, a track in G-DRAGON’s second solo album. Expectations are running high for the chemistry between these talented musicians.

“OO” will be ZION.T’s first album after he joined The Black Label, an independent label headed by YG’s main producer TEDDY. It seems that fans can’t wait to listen to the songs in ZION.T’s new and find out the influence ZION.T’s new label has had on his music.