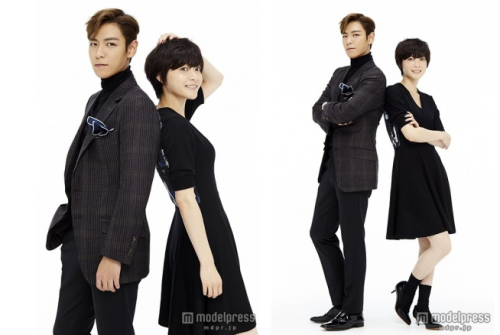 Interview source: http://mdpr.jp/interview/detail/1541965
Translated by @mmvvip (please credit with the link if you are taking this out. thanks)

Q: This is the first time working with each other. Please let us know about the impressions.

Ueno: When I first heard that I was working with Seunghyun, I became worried thinking “Would we get along well?” (laughs) When I first met him, he was wearing a mods coat and had a camera in his hand; definitely Woohyun. I was fascinated by the fact that BIGBANG TOP was hiding his bright, star side and totally became Woohyun while filming.

TOP: I come over to Japan almost every year for concerts, but this is my first time working with Japanese actors. I had in mind that I would want to try such thing, then I received an offer to work with Juri Ueno, my favorite Japanese actress. I’ve always loved the works Juri was in, and her acting is very unique, delicate, and lovely at the same time.  I am very pleased to work with her. When I first met her, she had those characteristics that I had imagined, and the shooting process was very fun.

Ueno: So many compliments (shy laugh). There are a lot of date scenes in this drama, and Seunghyun was very particular and detailed on using comedic phrases that are actually popular in South Korea so we could laugh. I was fascinated by his attitude of working hard without compromising, even though there were only little time.

Q: This story is about a man and woman who don’t even know each other’s faces fall in love through LINE (chat app).  Do you think this type of love is OK?

Ueno: As a story of a drama, it’s okay. But this is such a rare case in real life… There would be so many things to worry about, like how does he look like or thinking everything may be a lie.

TOP: Woohyun is a guy who had a deep heart break from last love. As I act him out, there were things that I could relate to him, so I thought falling into this situation may be possible. When one is in pain, there are those conversations with a person that soothes. There are times when that person gradually becomes a good friend and turn out to become a new lover. Q: I have heard that the shooting schedule was very tight and busy. Were there any memorable moments during the busy schedule?

Ueno: The pantomime (dance) scene. At first, I was introduced by a Korean dance teacher, but it was too difficult for me. I thought Haruka would be someone who only has about 2 weeks of dance experience, so I decided to learn from a teacher from Japan who has helped me before. Haruka goes to Korea without being able to communicate. She is clumsy but tries to express her weakness with her body. I tried to portray Haruka’s true feelings. That was a memorable moment because the director chose to complete the drama with my dance.

TOP: For me, it is the part that was filmed in an old building in Japan. I am interested in buildings, and I love old Japanese and Korean buildings. I really love that house we filmed in for this drama. I was very tired from the tight schedule, but I received good momentum from that house. However, the shooting schedule was too busy I only had 2-3 hours of sleep. I thought I never experienced such busy time in my entire 10year career. When nobody was looking, I would secretly go to the bathroom and cry in there..(wry smile)

Ueno: You were crying?! (laughs) You should have slept than go cry!

Q: You (TOP) have been doing great in both acting and in music.  What are the plans for your on-going career?

TOP: I do not have any plans (laughs).  This is because the things I experience in both of my music and acting career are all destiny. For example, when I have in mind that I want to do a particular type of acting role, I may not have the time at that moment, or I may just end up never getting that offer. Or when there is an offer for me, I may not be interested in that particular work. As for music, both BIGBANG and my solo works, we never “plan” to become huge, nor carry out with greed. Indeed my job is never predictable, and as I follow the destiny, there are things that are perfectly great, but there are times I have to face hardships. My way of doing things is to face those hardships directly, so I think I would just carry on like that.

Ueno: Same for me. Work is something that is blessed with, rather than to go grab it. I never was uncomfortable with my past works, and I was awarded with works that I’ve always wanted to do.  So I would keep working on what is given to me at that moment. Spirit of serving is something that is the most important and worthwhile for me.