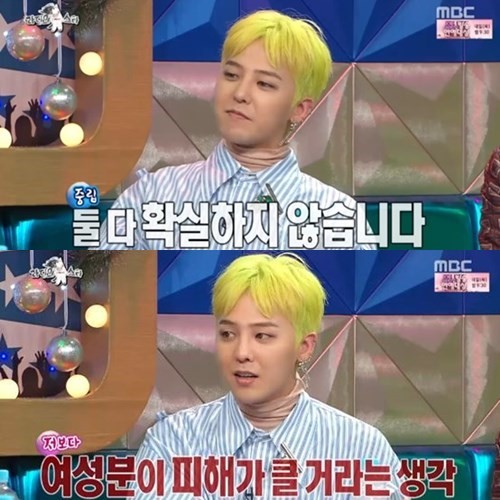 [스타뉴스=윤상근 기자]  “Both (about relationship and breakup) are not certain.”

G-DRAGON (28, Gwon Ji-yong) of top idol boy group BIGBANG appeared in MBC’s “Radio Star” show on December 28, to honestly talk about the rumors about his romantic relationships. So far, G-DRAGON has not either acknowledged or denied the rumors about his breakup with Mizuhara Kiko and relationship with Komatsu Nana which have been reported by media outlets, raising people’s curiosity. Finally, G-DRAGON talked about such rumors for the first time in this week’s “Radio Star” show.

He said it was not certain and it was not accurate, which was not easy to understand. He did not give clear answers about whether he has really broken up or he actually had such relationship. He just said that it is not certain and not accurate, even though he is the person directly concerned with the rumors. Such answers suggested that G-DRAGON did not want to clarify the truths behind the rumors. Rather than focusing on the truths, G-DRAGON seemed to be thinking more about the harm that would be caused to the other parts of the rumors.

The rumor about G-DRAGON’s relationship was triggered by a picture released on an on-line community in September this year. The other part of the rumor was Japanese actor-cum-model Komatsu Nana (20). G-DRAGON worked with Komatsu in March this year for Japanese fashion magazine “NYLON JAPAN”. Then, G-DRAGON’s undisclosed photos on his personal Instagram account leaked on the on-line community by somebody and it emerged as a hot issue on-line.

After the spread of the rumor, G-DRAGON’s label YG Entertainment said, “The company does not know anything about the rumor. We cannot confirm it, as it’s about GD’s privacy.”

There were rumors since 2010 about the relationship between G-DRAGON and Mizuhara Kiko, a Japanese model whose father is American and mother is Korean-Japanese. G-DRAGON did not acknowledge the rumors, but they have been widely thought to be a truth. Then, last year, it was known that the two broke up. In September last year, G-DRAGON said in NAVER V-LIVE broadcasting, “I don’t have a girlfriend now”.

In “Radio Star” show, G-DRAGON responded to questions about the rumors about his relationship and breakup subtly and carefully. G-DRAGON tried not to give an answer that the MCs wanted with much caution and maintained an unclear position as he has done so far, in “Radio Star”, too, to some extent.

However, G-DRAGON’s last remark seemed to be very meaningful. It is likely to raise fans’ curiosity about G-DRAGON’s relationships even higher.

“I think those kind of rumors will continue to exist.” 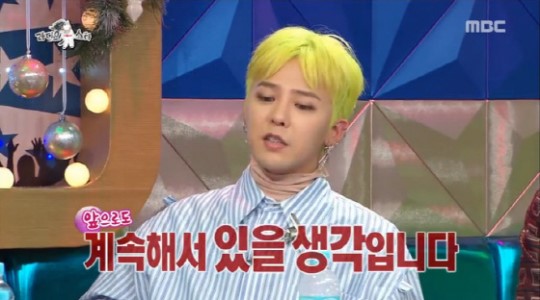