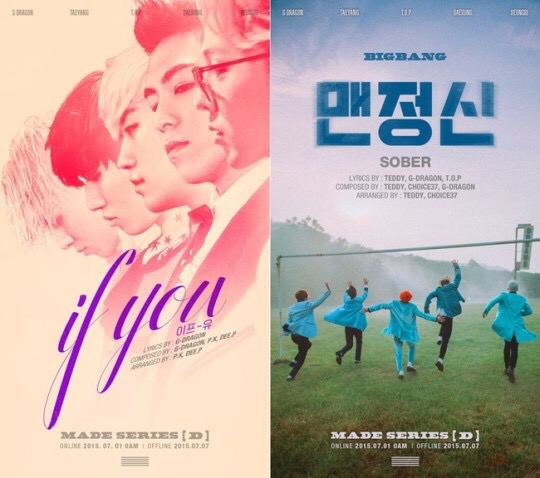 BIGBANG releases “D”, the third single of their comeback project “MADE”, on July 1 at 0 o’clock. The single album includes first title track “IF YOU” and second title “SOBER”.

Before the release of the third single album, BIGBANG heightened fans’ expectations by unveiling a teaser image and track list. “IF YOU” is drawing a big attention, as it is known to be the most sentimental song among all BIGBANG songs released so far. YG’s YAGN HYUN SUK said, “It will be a song that touches people from all generations to burst into tears.”

G-DRAGON took part in composing and writing the lyrics of “IF YOU”. PK who composed BIGBANG’s “MONSTER” and Dee.P who composed TAEYANG’s solo “EYES, NOSE, LIPS” with TEDDY worked on the composition and arrangement of the song.

Another title “SOBER” is an exciting and fun summer song. It is the first time for BIGBANG to release a new song in the summer season, since their mini-3rd album with “HARU HARU” which was released in August, 2008. The exciting summer song is expected to captivate music fans with a new feel completely different from “IF YOU”.

BIGBANG has been sweeping music charts from May, by releasing songs of different appeals. Music fans are paying keen attention to if BIGBANG will continue to conquer the music scene for three consecutive months, while girl groups are rushing to come back in this summer season.